Earlier this week, Ryan and I went to the Mekong Delta which is considered to be the “rice bowl” of Vietnam.  Here, everything from boats to restaurants to markets float upon the many rivers, canals, and streams that make up this watery world.  We took a tour for convenience.  After we were picked up at our apartment we were driven about 38 miles southwest of Ho Chi Minh City to My Tho.  This relatively quiet market town on the banks of the Cua Tien River is the gateway to the Mekong Delta.  Once here, we boarded a boat and crossed the river. 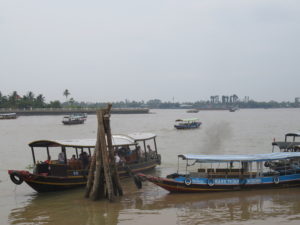 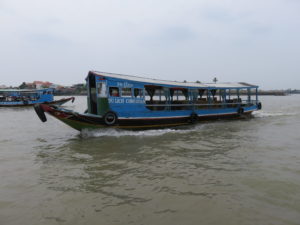 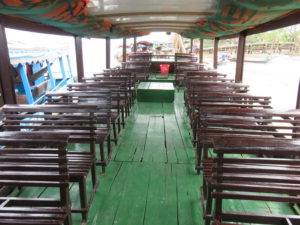 To see the floating markets, houses and restaurants we would have had to venture further into the Mekong Delta to Can Tho.  However, as we were short on time (and funds) we settled on a day trip that still offered a variety of sights and activities.  Our first stop took us to try some honeybee tea.  It was really good and not as sweet as I had been expecting.  In addition to the tea, there was an assortment of honey candy.  My favorite kind tasted like peanut brittle. 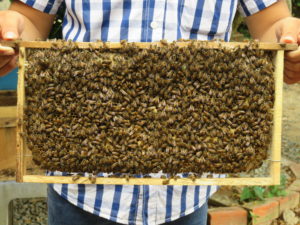 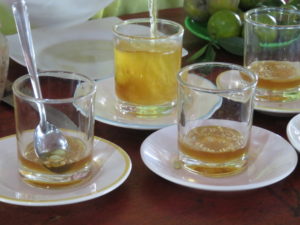 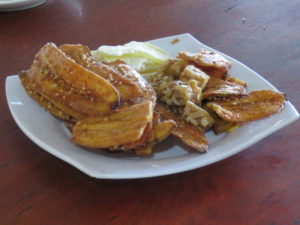 From there we traveled further inland by foot to try some fresh fruit and listen to traditional southern Vietnamese music.  It’s called “don ca tai tu” and is a blend of court music and folk music.  The instruments were interesting, as was the singing.  The fruit included pineapple, papaya, sopadilla, star apple, and brown lychee.  The brown lychee was definitely the most fun to eat.  After you pop the little ball into your mouth, you have to bite just hard enough to break the skin, then peel it away to reveal a rubbery little ball.  You chew the flesh away from the pit. It’s a sweet fruit. 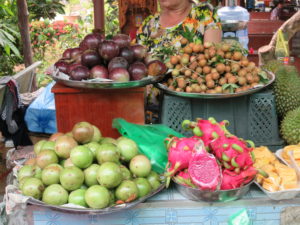 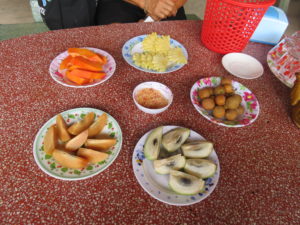 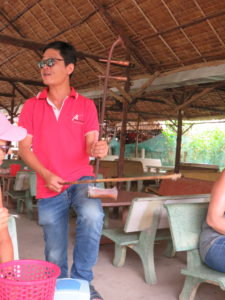 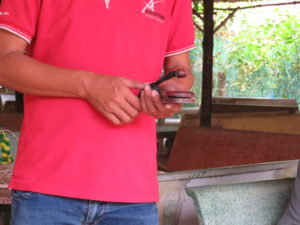 After the fruit tasting and the music had finished, we loaded up into long boats called sampans and were taken down narrow canals.  These were crowded and we had to make sure to keep our hands inside the boat so they couldn’t get crunched by passing boats.  We saw tadpoles jumping along the muddy banks.  Our lady was nice and she did work hard, but she definitely made a display of her efforts to ensure she would get a good tip.  This whole leg of the journey was very touristy and even passing boats tried to get some tip money out of us.  We didn’t tip them, but we did tip our driver well.

Once we were safely back on land, we were taken to a family run business to try some coconut candy.  I didn’t particularly like the finished product–it tasted too much like molasses–but it was interesting to see how it was made.  We were also highly suspicious that the business was created solely for tourists.  While we were there, different tour groups came and went and we were given ample time to “shop around.” 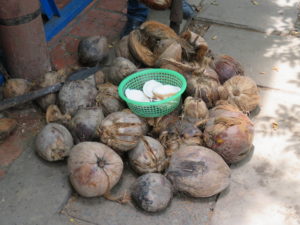 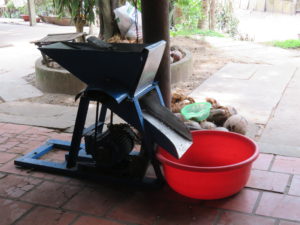 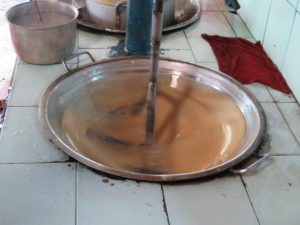 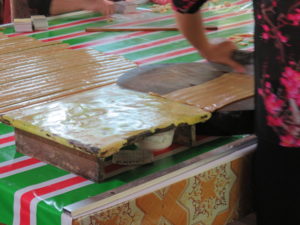 Then it was back to the boats, only these were motorized and the canals were went through this time were much less crowded.  Along the way we got to visit with the other members of our group.  They were all from Australia and were lovely and friendly people. 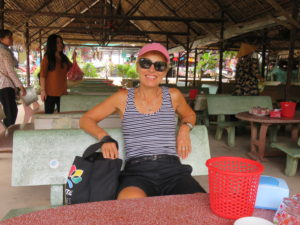 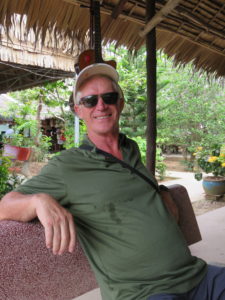 This leg led us to our lunch.  I don’t know what the restaurant was called, but it also seemed to function solely for tourists.  Each tour company claimed a different section of the restaurant for their group to sit and as far as I could tell, everyone was served the same thing.  Our meal included a nice variety of local specialties such as “standing fish,” fried rice, morning glory greens, banh xao (a Vietnamese savory fried pancake), some kind of soup, and an interesting sticky rice ball.  The food was pretty good, but it wasn’t great.  In my opinion, the fish tasted a little muddy. 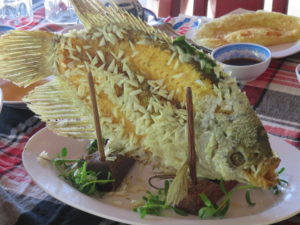 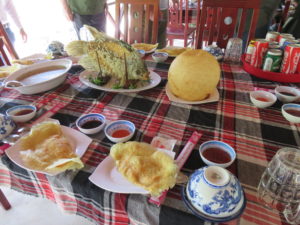 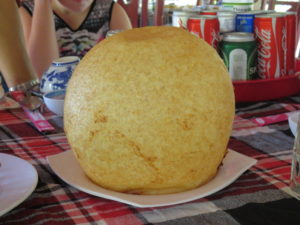 After lunch we climbed onto carriages pulled by tiny horses.  They took us back to our boat.  This was my least favorite part of the adventure as the horses were small and unshod and forced to trot or lope down paved roads while pulling carts packed with four to five people.  Again, the horse and cart business seemed to be operating solely to serve the tourists.  Locals zoomed around us on scooters and in cars and once we arrived back at our boats, the cart drivers were tipped. 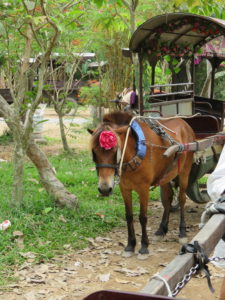 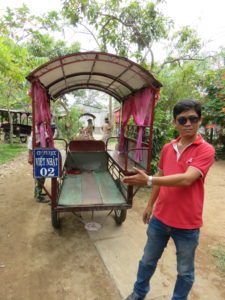 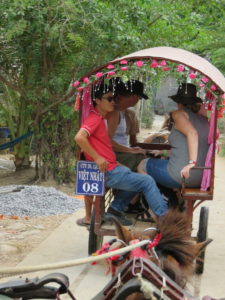 We boarded the same boats that had brought us across the river at the beginning of the adventure.  We were given fresh coconut water to drink (yum!) and got to enjoy the cool breeze and each other’s company for the remainder of the ride back to My Tho.  All and all it was an enjoyable experience, although definitely on the touristy side of things, as far as tours go.

My favorite part may have been afterwards.  On the way home, we stopped to visit the Vinh Trang Pagoda.  It was very impressive and was definitely not built for tourists.  If we ever get another opportunity to visit the Mekong Delta, we’d really like to see the floating markets in Can Tho.  This time we’d probably explore on our own and avoid some of the tourist traps.  I know that what we saw was merely a glimpse of the Mekong Delta, and although it may have been through a tourist’s binoculars, it was interesting all the same. 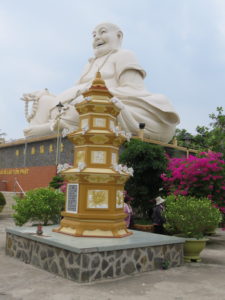 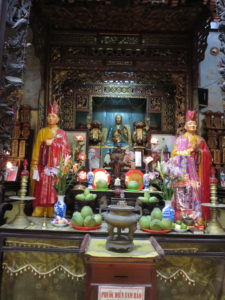 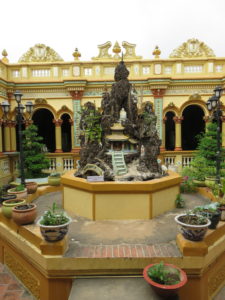 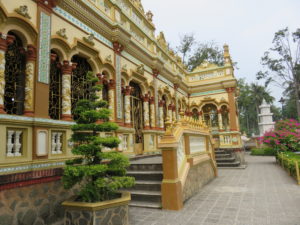 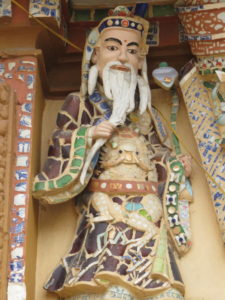 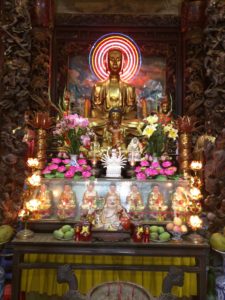