While Ryan and I were still in Medellín, and while we still had David, we all took an exotic fruit tour which enabled us to try sixteen different types of exotic fruits from the local market.  We all found it to be very fascinating. 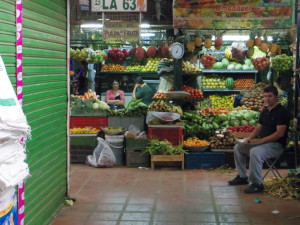 While on our tour, we learned that the most common use of fruit in Colombia (and in many South American countries) is to make juice.  There are many fruits that are not especially sweet, but once they are drained and A LOT of sugar has been added, they make excellent juice.  Colombians have a big sweet tooth so the sweeter, the better.  Below are several examples of these fairly tart fruits before they are made into juice. 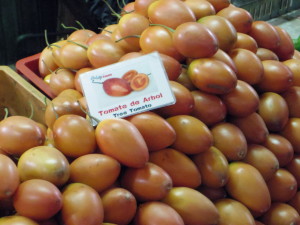 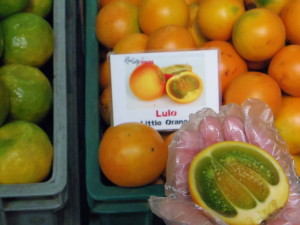 The alicita chontaduro fruit (peach-palm) is apparently an aphrodisiac.  There was a good amount already prepared in a large tub for us to try and the texture and flavor reminded me of a mixture of sweet potato (or squash) and roasted chestnut.  It was especially tasty with a little bit of salt and honey. 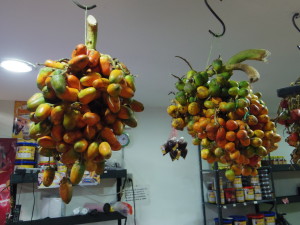 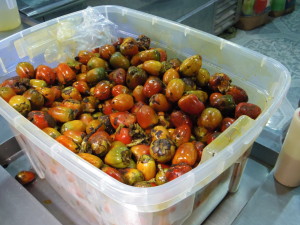 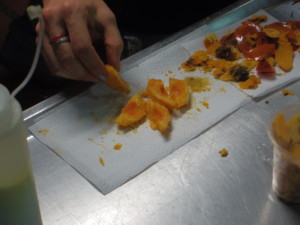 This fruit, the borojo was also an aphrodisiac.  Most notable to me, aside from its appearance was its strong sweet and earthy odor.  The fruits are collected and immediately fit into these bags because as they ripen, they completely lose their form.  The borojo fruit is most often used as a sweetener to make juice, jam, wine and desserts.  While we only tried it in juice, it had a mild sweet and earthy sort of flavor, just the way it smells. 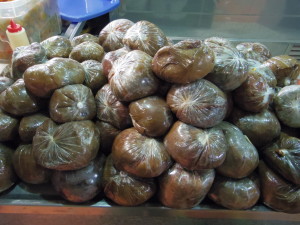 We were able to try four different types of passion fruit.  All have relatively slimy insides and remind me of alien babies.  You just suck the mess of seeds down oyster style.  Unless I close my eyes and slurp, I don’t get very far.  The gulupa was my favorite as it seemed to be the sweetest. 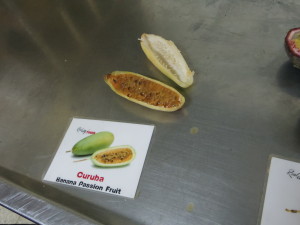 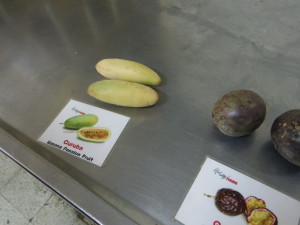 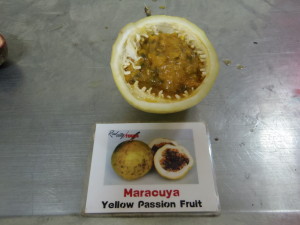 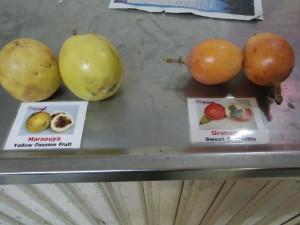 This little guy had to be cracked open with a hammer.  Once we had access to the pod-like fruit inside, we found a sweet floury past surrounding each seed which is supposed to be very high in energy.  It is one of the richest vegetable foods known because of its high concentration of starches and proteins.  It took a while to suck all the matter from around each seed and the texture was so strange that while the flavor was sweet and pleasant enough, I felt like I was eating saw dust which clung to the roof of my mouth. 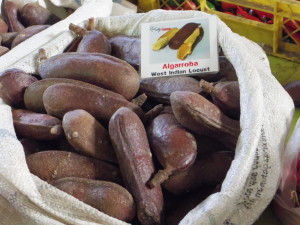 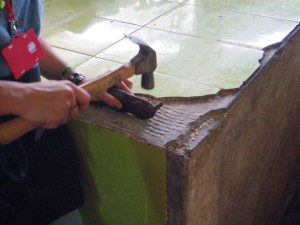 Apparently, the guayaba (guava) is one of the most nutritious fruits a person can eat.  The saying should go “A guava a day keeps the doctor away.”  Colombians eat every part of the guava, including the peel.  On the tour however, we skipped the peel because we could not wash the fruit before consumption. 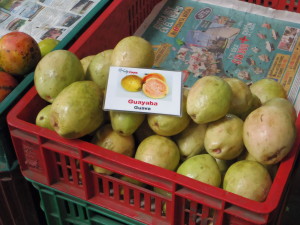 Because this guy was so massive and David, Ryan and I were the only people on our tour, we didn’t get to try him.  Bummer.  But I must say he looks especially prickly along with his portliness.  Everyone who knows me knows how crazy I am about blow fish, so there’s that.  As far as I’m concerned, he gets points on presentation alone, just for showing up.  And who couldn’t love a name as cool as soursop?! 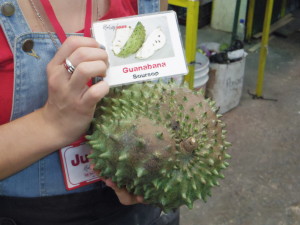 I hate to admit that I don’t remember anything about these two except that the second one is not generally on the tour because it can not often be found in the market.  Our guide was so excited when she found it that she added it on.  But there was no card and I don’t remember what it is called.  The gentleman that ran the stand offered the fruit to us to try for free since he was happy to be included on the tour.  This was yet another example of how nice and friendly Colombians can be. 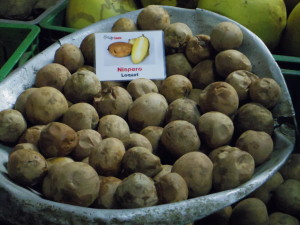 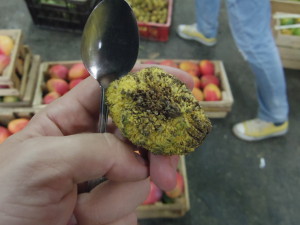 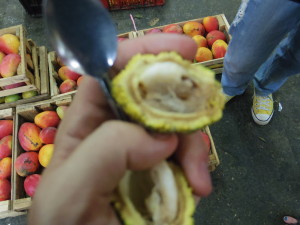 The coolest thing about the uchuva (cape gooseberry) was the peeling process.  As they were one of the most inexpensive fruits at the market, we were allowed as many as we wanted.  I only took two because the flavor was pretty tart and zingy as gooseberries tend to be. 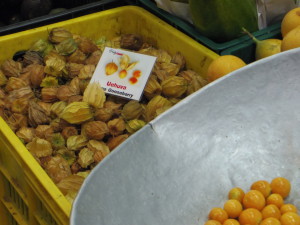 The only things I remember about the feijoa (guavasteen or pineapple guava) was that the white fleshy fruit contained a lot of seeds and had an especially nice topical aroma.  I think the flavor was surprisingly subtle for the initially promising fragrance. 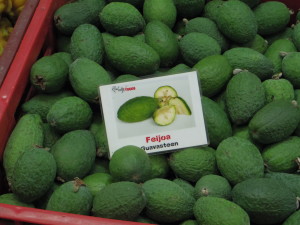 My favorite was the pitahaya (dragon fruit) which was sweet and especially refreshing.  Again, I ingested the black and crunchy seeds oyster style.  Unfortunately for me, this one is also a natural laxative so I was only allowed one.  Sad! 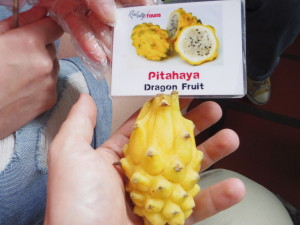 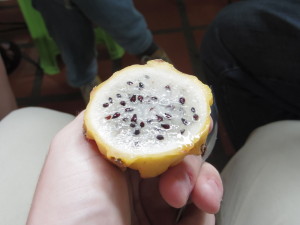 The most interesting fruit to me (or at least the one which was the most fun to eat) was called a mamoncillo (Spanish lime).  About the size of a very small lime, you have to first bite through the skin which is surprisingly thin.  Once you do this, the whole fruit snaps apart and a slimy ball with a large pit pops out.  You eat this fruit by chewing on the little bits of flesh around the rubbery pit.  It was sweet but mostly a lot of fun. 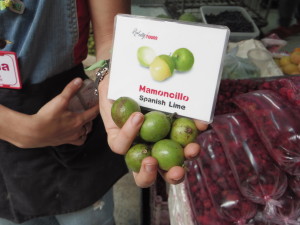 After about two hours, we finished the tour with a freshly made corn arepa de choclo and a refreshing juice.  Not a bad way to spend a beautiful morning in Colombia. 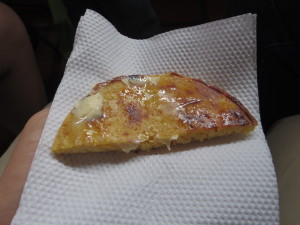 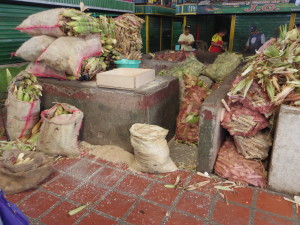 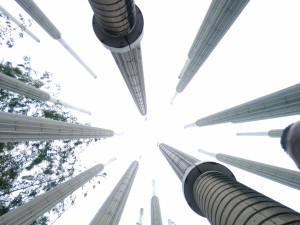 It’s really kind of nice traveling in a country that is happy to have you there.  This is certainly the case with Medellín.  Although Medellín was literally one of the most dangerous cities in the world not so long ago, this is certainly not the case today.  But no matter how much it has changed, Medellín still does not see a lot of travelers.  This is hard for a country that is desperately trying to overcome their past and move on to a bright new future.  Therefore the travelers who are brave enough to venture forth and find that there is no longer anything to be afraid of are greeted most graciously with smiles and enthusiastic shouts of “Do you like Colombia?” in rough English.  We are part of an early wave of tourism that Medellín has not seen for a long time and we symbolize the dawning of a new day for Colombia. 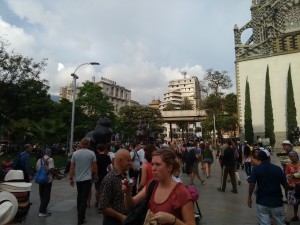 All of this was explained to Ryan, our friend David and I when we signed up for a four hour walking tour of the city.  This was the first time we had ventured downtown which is often recommended that tourists avoid.  But our guide Hernan explained that a lot of these areas are essential for understanding the history of Medellín and are currently more misunderstood than dangerous.  One of the things I found to be most interesting was that Antioquians (and more specifically to Medellín, the paisas) are an especially proud people and are determined to show the rest of the world that there is more to their city than its violent drug history.  In fact, they are so determined that even our guide would not say Pablo Escobar’s name on most parts of the tour.  Hernan said that this was because he didn’t want locals (who are especially curious) to think he was giving us a tour on Pablo Escobar as this is very much frowned upon.

While downtown was not as nice as the areas we have been staying (Laureles and Poblado), it was certainly worth seeing.  The world famous Colombian artist, Fernando Botero has donated many large bronze sculptures to the city and they are spread out through the downtown areas especially.  The most arresting part of the tour for me was the final location when we stopped at a large plaza where concerts are often held.  There were two Botero sculptures of birds standing side by side although one had been badly damaged in a bombing incident years before.  Our guide explained that after the first sculpture was damaged, Botero donated a second sister sculpture and insisted that the first be left as a reminder.  Side by side, the two sculptures represent the past and the future of Colombia. 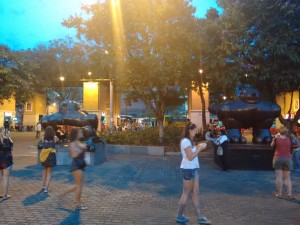 The last weekend Ryan and I spent in São Paulo was one of the most memorable to date.  Our good friends and hosts, Erica and Guilaramie took us into the heart of the São Paulo samba scene.  In general, I found the Brazilian caipirinha’s to be a little stout and so I drank water and enjoyed the lively music, watching the more experienced dancers take command of the dance floor. 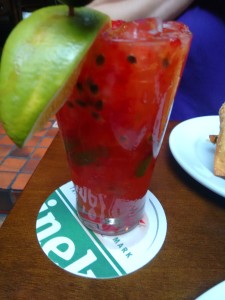 One of my favorite things about Lapa 40° was that they employ a half dozen young men whose one and only job it seemed was to dance.  With single women.  With married women.  With each other.  And dance they did.

When I finally felt that fabulous upbeat music come alive inside of me and felt ready to try it out for myself, I worked my way over to one of the young men wearing a black “Dancer” t-shirt and asked him for a dance.  This dance was the Forro and vaguely reminded me of a country swing dance with a very sensual Latin vibe.  It was so much fun and I fared fairly well, if I may say so myself.  I only stepped on him a few times… 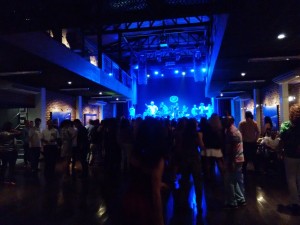 Every so often, they would lead a group dance that anyone could easily follow and Erica and I ran out in front of the stage and participated enthusiastically in every one of them.  Although I did not feel confident enough to brave the samba out on the floor with the pros, I truly enjoyed watching it.  There is nothing quite like the samba.