This year for my birthday, Ryan and I embarked on a day cruise in Ha Long Bay.  This was something I’d very much been looking forward to doing and I was thrilled we were going to be able to take the time to do it while our Thai visas were being processed in Hanoi.  To visit Ha Long Bay, you pretty much have to go with a guide.  Our group was nice and small, with less than a dozen people from different parts of the world.  We were driven about four hours from Hanoi in an air-conditioned van.  Then we were loaded onto a spacious boat and fed a nice meal. 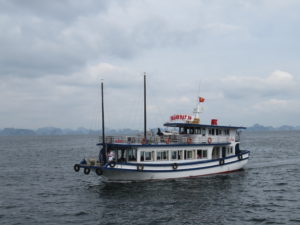 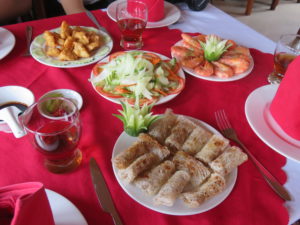 Unfortunately, the weather was slightly overcast the day we went so we didn’t get the full experience.  Still the scenery was pretty majestic.  We spent the next couple of hours cruising past towering lush limestone islands, most of which had some kind of a story relating to dragons.  Our guide was informative and he spoke good English so were were able to follow along as he explained the significance of dragons in the Vietnamese culture.  Along the way, he kept pointing out different land formations that were shaped like dragons.  I often had to take his word for it as the dragons were not always easy for me to spot.

About mid-way through our adventure, our boat docked and let people off to explore some of the nearby caves via kayak or row boat.  Ryan and I had misunderstood this part of the experience during our booking (which had to be arranged ahead of time).  Thinking that we had the choice of kayaking for an additional cost or exploring some caves on foot, free of charge, we’d opted out of the kayaking.  It turned out that this meant that we stayed on the dock with the boat, but at least there was a nice view for us to enjoy while we waited for the rest of our group to return. 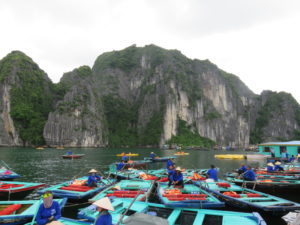 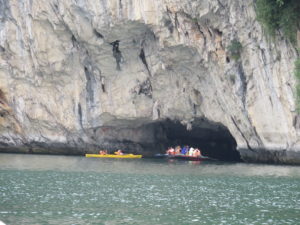 We soon discovered that the cave explorations (on foot) were a separate stop altogether.  We loaded back onto our boat but towards the end of the trip it docked again and everyone headed up to the caves.  Once again, our guide kept pointing out different dragon-shaped rock formations.  If these had been hard for me to spot before, my ability only worsened once we entered the caves.  Apparently there were dragons everywhere–I just couldn’t see most of them.  After many failed attempts at squinting and turning my head this way and that and still failing to see anything that even resembled a dragon, I had to keep myself from laughing.  Now it’s a joke that Ryan and I share.  “Can’t you see the dragon?” one of us will say, pointing to a random tree or puffy looking cloud.  “It’s right there.  Next to that other, much bigger dragon.” 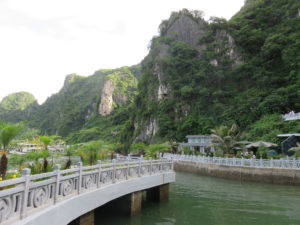 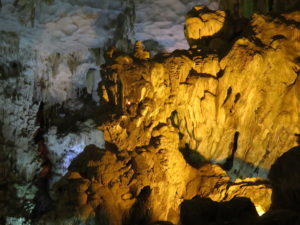 Do you see the dragon? 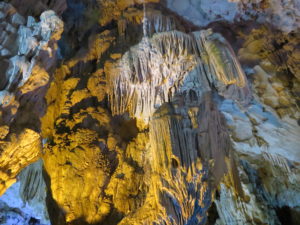 What about this one?

While I might not have been very talented at spotting the dragons of Ha Long Bay, I still enjoyed the trip and was grateful we got to visit one last treasure before leaving Vietnam.  For the previous nine months, we’d slowly been working our way from the south, clear up to the north.  Dragons or no, we were fortunate to have seen plenty of mysterious and interesting things along our way.  There was no question about that. 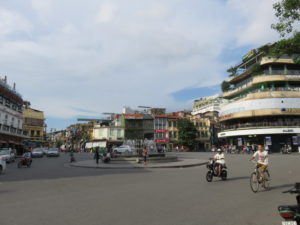 After nine months of living in Vietnam, we were getting ready to head to Thailand (yay!).  Before we could, however, we had to get our visas.  Luckily Hanoi has a Thai embassy so we had a great excuse to make our way up to Northern Vietnam to spend a few days in the capital city while our Thai visas were getting processed. 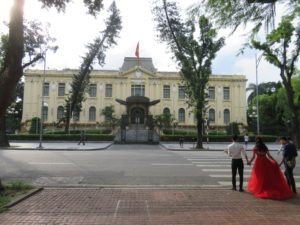 We’d heard about the great food culture located in Hanoi and this was something we were eager to investigate.  Ryan was particularly interested in trying the cà phê trứng (egg coffee), which is especially unique to this area.  He described it as being crazy sweet (no surprises there as ALL drinks in Vietnam are super sweet, even by my standards) and being too thick to drink. 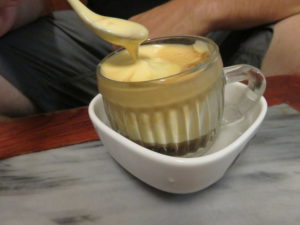 We also tried some xôi xéo which is yellow sticky rice topped with fried shallots, corn mash, turmeric powder, mung bean, and different kids of protein like stewed pork belly, shredded chicken, and/or meat floss.  It was an interesting and appetizing mix with a unique texture.  (I definitely thought of my mom.) 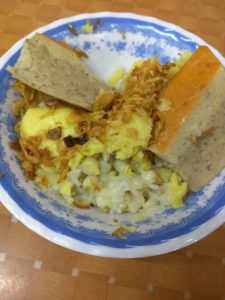 A less appetizing option (in my humble opinion) was the cơm hến which is a dish made with baby clams and leftover rice served at room temperature.  I think I only made it past a couple of bites before handing it over to Ryan.  He was a bigger fan than I was and he was happy to help me out.  (This is yet another reason I keep him around.) 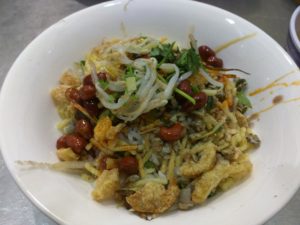 Luckily there were some safer options as well.  We were able to find two of my favorite Vietnamese dishes including bún chả (grilled pork and noodle) and cơm tấm sườn (grilled pork chop with broken rice).  As you can see from the descriptions, there was much less going on here, which made me a happy camper. 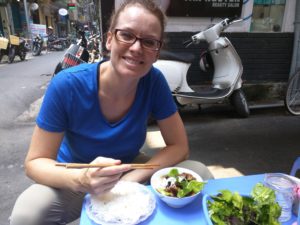 On our way back from our yummy cơm tấm sườn dinner, we passed some stalls with what appeared to be roasted pigs.  On closer inspection, however, we discovered that they definitely had the skulls of dogs.  We’d heard of people eating dogs (and rats) throughout different parts of Vietnam, but this was the first time we’d seen any evidence of it.  It was a sad scene for me and I got out of there too quickly to take a picture. 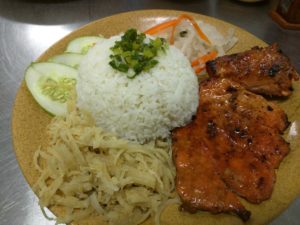 After that it was hard to get the image out of my mind and I couldn’t help but wonder if I’d accidentally consumed dog meat at some point during our nine month stay in Vietnam.  I hoped not, but there was no way of knowing.  We passed dogs chained outside stores and restaurants and I feared for their fate.  Of course there was nothing I could do about it.  I guess sometimes you just have to eat whatever mystery meat you get and hope for the best, doggone it.  It’s either that, or become a vegetarian. 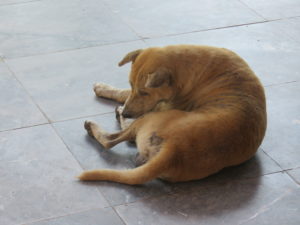 I started experiencing motion sickness when I was in high school.  After that I wasn’t able to go to a lot of amusement parks and ride the rides.  As things stand I can barely ride in taxis or on small planes without getting queasy.  However, I decided that visiting Sun World while Ryan and I were still in Danang would be worth the risk, pretty much regardless of what happened.  It was Sun World and it sounded cool. 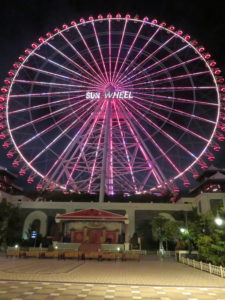 So one night we loaded up on Dramamine and followed the distant lights of the giant Sun Wheel until we were standing at the entrance of Sun World.  (I’m not going to lie–I was pretty excited.)  We decided that visiting at night when the temperatures were more reasonable would be in our best interest.  Since I’ve gotten to Vietnam, I’ve learned to love nighttime.  Not only is is much cooler, but the lights are pretty impressive around the city and definitely at Sun World as well. 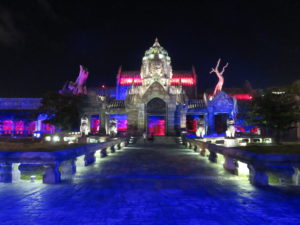 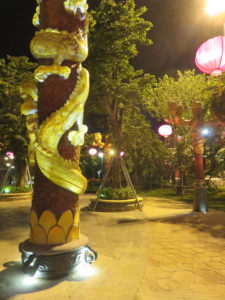 It was fun to see the city from the top of the Sun Wheel.  With less than a week remaining of our stay in Danang, it seemed like a nice place to say goodbye to the city we’d lived in for the past six months.  The Sun Wheel was huge and slow moving and we made it on and off the ride without a hitch.  So far, so good.

I was feeling a little braver so we tried the smaller of the two rollercoasters.  It was exciting enough to ride more than once and then after that we stepped it up a notch.  The next one lifted us high into the air, only be be dropped straight back to the ground.  It was at this time that I remembered that I don’t particularly like heights or fast speeds.  (Oops.)  We were literally going so fast that I couldn’t breath and nothing but a deep, guttural grunt escaped from my clenched jaw.  Still, I’d made it through and I wasn’t feeling particularly nauseous or cautious. I didn’t have any pictures of us on this ride, so I borrowed this one from the internet. I think Ryan and I were two of four people riding it the night we were there. They made us leave our shoes at the bottom.

This brought us to the Queen Cobra.  The park wasn’t busy so Ryan and I had the rollercoaster all to ourselves.  We climbed into the front car and strapped ourselves in.  The cobra started to move.  Slowly it slithered up the track, higher and higher and I again remembered my fear of heights.  Of course, by this time it was too late.  She took us down.  She twisted us around and around and around, then upside down.  I slammed into my harness (I even had marks afterwards to prove it).  I screamed.  I felt like I was thirteen.  It was well worth the ride, which I promptly took again. 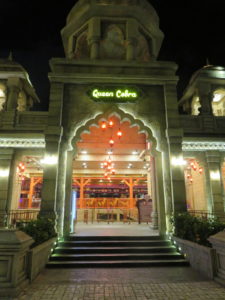 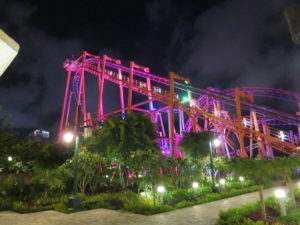 It doesn’t look like much, especially from this angle, but it was impressive. Although it was a short ride, it was fast and furious. (Ryan even agrees.)

Afterwards I got to thinking that my evening at Sun World was not unlike my time in Vietnam.  Ho Chi Minh City was terrifying, but it was also exciting and I thought, “Hey, I can do another city.  A different city.  Let’s go to Danang”  After that it was, “Why not another country?  I can give Thailand a try.”  Ryan and I have been traveling since 2014 and it’s not always easy for me.  There are many aspects of our new lifestyle that are well outside my comfortable zone.  Yet I keep at it because scary as it may be, the thrill of the experience is well worth the risk.  We are on our way to Thailand next.  Once again I’m going to strap myself in and get ready to go on yet another wild ride.  We’ll see what this one brings.  Thank you Vietnam, and goodbye.