Ryan and I were fortunate to be in Thailand for Songkran, which is the Thai New Year’s festival.  Although there are many different traditions, including visiting local temples and making merit offerings, this holiday is well known for its water festival.  As you drive down the road, people will toss icy water on you from the curb or squirt you with squirt guns and hoses.  Meanwhile, a truck will pull up on your other side and dump buckets of water on you.  It’s a wild (and wet) time!

Ryan had done his research and so we had a pretty good idea of what was in store for us.  We purchased a squirt gun–they were selling them all over the island–and loaded up on Blue Betty ready for battle.  I had two jobs.  The first was to be Ryan’s gunner girl.  I squirted people as we approached or retreated (although I think the latter was more my style).  The little ones were the funnest to engage because they were so stinkin cute!  My second job was to film the festivities as they unfolded around us.  I’m not sure I was very good at either, but I had a blast! 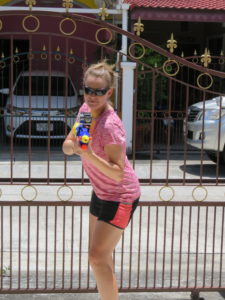 Go ahead. Make my day.

In accordance with another tradition, we had chalky mixtures rubbed on our cheeks and neck.  As I understand it, the chalk marks one’s blessings and also symbolizes good luck for the new year.  The chalk came in many different colors and there were different scents as well.  One reddish-orange mixture smelled strongly of menthol.  Another had a distinctly spicy smell.  I was grateful we were wearing sunglasses and didn’t get any in our eyes.  I felt like I wearing war paint! 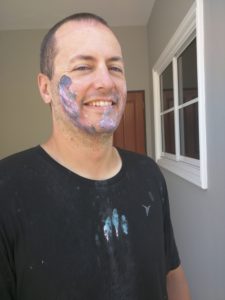 You should see the other guys…

When all was said and done, we returned in pretty rough shape.  Our spirits, however, couldn’t have been higher!  Songkran was one of the most interesting and exciting holidays I’ve experienced abroad.  People were so joyful and gracious.  Many even made attempts to wish with us “Happy New Year” in English or Thai, or a combination of the two.  I felt welcome and included.  It was a wonderful experience and I’m so glad were were able to celebrate Songkran with the good people of Phuket, and with each other. 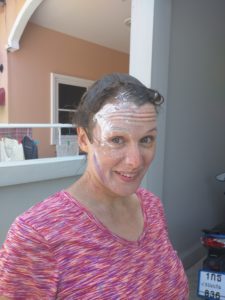 Wow, that was pretty intense.