Thailand, the land of smiles, is known for having beautiful beaches and lots of elephants.  It’s also known for its ladyboys.  Last night, Ryan and I went to see the Simon Star Show.  This is a Vegas-style show featuring young men and ladyboys dancing and lip syncing to a variety of songs in different languages.  The sets of the show were impressive and the costumes were gorgeous.  We had excellent seating, right in the front row, and I was fascinated by the idea that the beautiful women I was watching had once been men.

I know very little about ladyboys.  It is my understanding that a ladyboy is a transgender woman or an effeminate gay male.  To my untrained eye, it was impossible to identify the ladyboys from the other female performers (if there were any).  Ryan said that he could see a few Adam’s apples, but I had a more difficult time spotting them.  Had I not known ahead of time that the stars of the show were ladyboys, I would never have known.  They were absolutely beautiful and could not have been more feminine.

While I had assumed that the reason for the lip syncing was largely a result of the language barrier, I later discovered that this may not have been the only reason.  Most ladyboys still have a surprisingly low voice–even with training, the pitch might sound odd–so having them sing the songs themselves would have changed the show considerably.   I discovered this myself afterwards when we were invited to take pictures with the performers (for 100 THB).  They were just as beautiful up close, but their voices were somewhat of a surprise.

When all was said and done, the show was a little overdone for my taste and not all of the dancers were great, but it was a fun and interesting evening that provided a small glimpse into a mysterious world that I know very little about.  One thing is for certain.  I have a new respect for the potential results of hormone replacement therapy and sexual reassignment surgery.  The ladyboys of the Simon Star Show were absolutely gorgeous, and in my opinion, they were worth seeing. 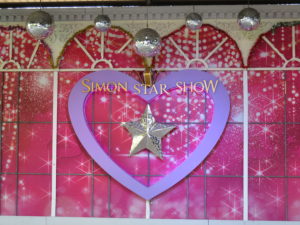 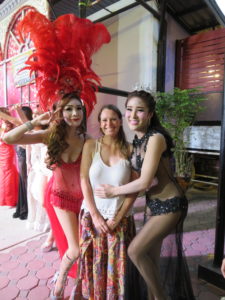 I would like to tell of the recent, unlawful imprisonment our our current scooter, Blue Betty.  It was just another Tuesday night with one small difference.  I was feeling particularly brave so Ryan and I decided to scoot over to Patong to experience Bangla Road, located just off Patong Beach. 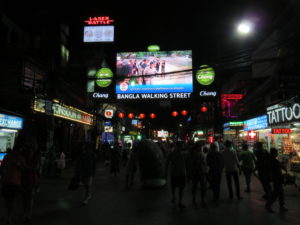 Bangla Road is well known for being the center of the night life scene in Phuket.  As soon as the sun sets, the road is closed off to vehicle traffic and transformed into a lively walking street lined with clubs and bars blasting loud music and selling overpriced beer and cocktails.  For those interested, it is also a good place to see a “ping pong” show.  These are only some of the reasons that I’d been avoiding it since we arrived.  While we had no intention of wandering into any of the shows, I figured we could at least walk down the road and see what we saw. 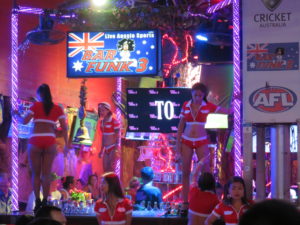 I hate to admit it, but I was relieved that we didn’t see much.  We walked down the length of the road several times and all I really saw were some go-go girls standing around their poles in booty shorts and belly shirts.  It was no big deal.  Still, as I was continually approached by people trying to sell us marijuana or tickets to the ping pongs shows (many of them looking like respectable mothers of small–or not so small children), I couldn’t help but feel like I was just asking for trouble simply by being there.  Clearly it was not my scene and after a couple of drinks at one of the less intimidating bars, we decided to be on our way. 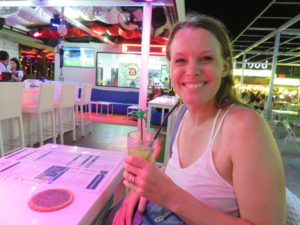 This was easier said than done.  When we returned to our scooter, we found that Blue Betty, along with all the other scooters along that section of the road, had been chained together.  There was a bogus parking ticket stuffed into her rack claiming that she had been parked illegally (which was not the case).  The ticket stated that a fine of 1000 THB (or roughly $33 USD) had to be paid before she could be liberated.  So, rather than coming to an uneventful close, it appeared that our night was just beginning. 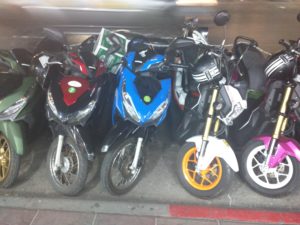 Had I been there by myself, I would have said, “Ooops, sorry!  I did’t know.”  I would have paid the fine and been done with it, happy and relieved to be on my way.  However, I was there with my husband who makes a point to stay informed enough to know that the maximum fine for a parking ticket in Puket is 200 THB (just over $6 USD).  He took pictures of the “crime scene,” intending to call the tourist police if we couldn’t get the issue resolved at the local police station. 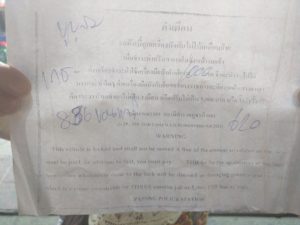 Luckily it never came to this.  While we were out looking for the local police station (on foot), someone either cut the chain, or the perpetrators unlocked it themselves.  When we returned, we found that Blue Betty was free at last!  We got out of there as fast as we could and we didn’t look back.  It wasn’t an especially pleasant scene, but no harm was done.  Still, we’ll probably think twice before returning to Bangla Road. 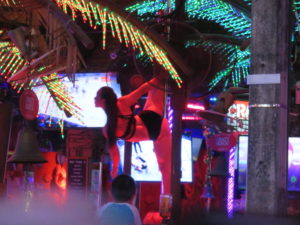 Ryan and I have been in Phuket for a couple of weeks now and we’ve started to get more comfortable with our routine.  By we, I mostly mean me, as a routine is not nearly as important to Ryan as it is to me.  Since the new year we’ve both been working our butts off as part of our New Years resolutions to lose some weight and get in shape.  We did very well during our two months in Kuala Lumpur.  It helped that we had a gym in our apartment building and we took advantage of it.  We got up early and worked out five days a week, lifting and doing cardio.  Some days were more painful than others. 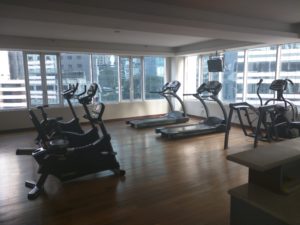 Our gym in Kuala Lumpur 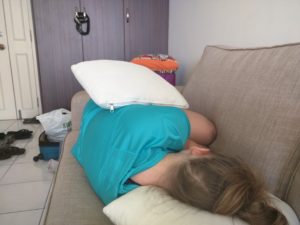 Me avoiding our gym in Kuala Lumpur

We recently found a new gym in Phuket that has a promotion going.  Monthly memberships cost 990 THB per person, which comes out to around $33 USD each.  We also found this great 4km bicycle track at a nearby park.  Every morning (5 days a week) we get up at 6:30am and Ryan drives me there.  On three of the five days I jog and the other two I ride a bike.  I’m happy to report that I enjoy exercising this way much more than I enjoy lifting at the gym (which we do in the evenings now, after I teach).  Being out in the fresh air and sunshine has made a world of difference!  It also helps that when I run, I’m actually getting somewhere. 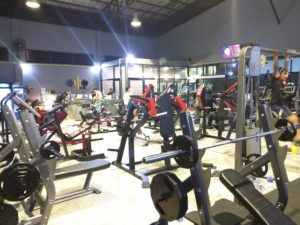 Our gym in Phuket 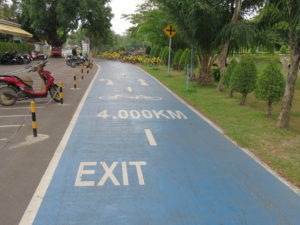 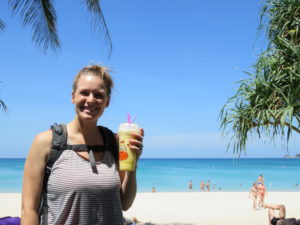 I’m grateful for days off! 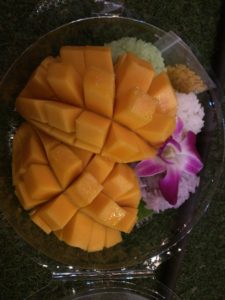 I’m a little too grateful for mango sticky rice…

I’ve also been cutting back on the amount of food that I’m eating to help me lose some weight.  With our ever-changing lifestyle, it’s been more difficult to control what I eat, since we don’t usually cook.  We don’t even have a functional kitchen in our current location.  (This was somewhat of a surprise, along with the very hard mattresses and cold showers–but I guess these are common characteristics of more traditional Thai housing.)  The amount of food I’m eating is something that I can control, however, and I’ve been trying to decrease it.  Asian portion sizes are generally on the smaller side, so this helps, and I’ve done a good job cutting out breakfast and snack foods.  I also try to limit smoothies and sticky rice to my days off. 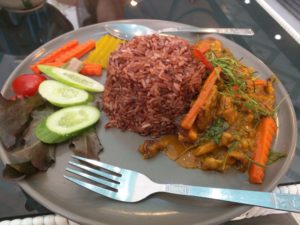 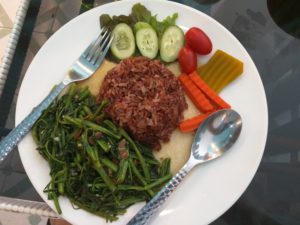 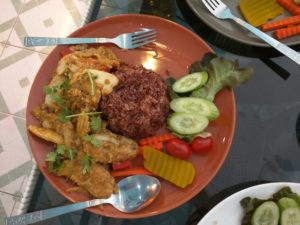 From this well of ambition, a new obstacle has arisen.  I’ve been especially tired from getting up early and going to bed not as early as I should.  I’ve been taking a lot of naps as a result and wasting the few hours of spare time I have in the afternoons before I start teaching.  I’ve been trying to go to bed earlier, which seems to be the obvious answer.  I even tried drinking coffee.  Unfortunately, the only way I can drink the stuff is by adding a lot of sugar which is how it automatically comes in Thailand.  I really don’t need or want the extra calories (or the coffee addiction, which I’ve been proud to have avoided up to this point), so this week I switched to Coke Zero and tried making sun tea.  The trace amounts of caffeine have been enough to help me push past that afternoon nap to get the most out of my day.  I already got in several good productive days of writing and I feel like I’m on a roll!  Wish me luck! 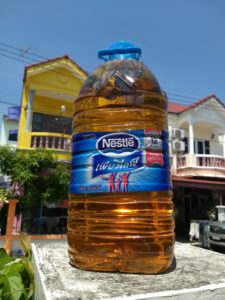 I think I’m doing this right…