When Ryan surprised me with a horse ride on the beach for our four year wedding anniversary, I couldn’t believe it!  Not only is our anniversary not for another month, but Ryan is not a big fan of horses.  I wasn’t aware of the horse scene here in Bali, but it’s here and Ryan found it for me because that’s how much he loves me.  It was such a wonderful surprise!  I sang “I get to go ride horses” to the tune of Willy Wonka’s “I’ve got a golden ticket” all the way to the stable, because that’s what it felt like. 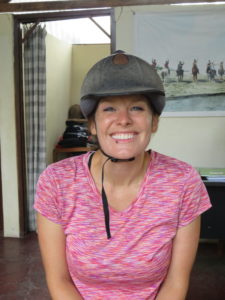 Although Ryan wouldn’t be joining me on the ride since the local horses are small and he exceeded the 90 kilo weight limit, I think he preferred it this way.  In fact, he seemed almost as happy as I was when he dropped me off at Kuda P Stables and continued on his way.  His plan was to go exploring and it was by complete coincidence that he ended up at the same beach just in time to capture all my wonderful memories.  He told me that he came around the corner–after having parked the scooter at a different entrance–and the first thing he saw was me racing towards him, covered in sand and smiling from ear to ear.  I couldn’t believe my luck!

But I’m getting ahead of myself.  Upon my arrival at the stable, I got all checked in.  The staff were friendly and very thorough while fitting me for an appropriately sized helmet, a task that is always difficult given the unusually small size of my head.  After that, things moved along very quickly.  I was led to a beautiful grey mount named Crystal that just so happens to be the poster child of Kuda P Stables.  I was also introduced to my groom.  I’m embarrassed to admit I could never properly pronounce his name, so for the purposes of this blog, I’ll call him Antonio because it sounded similar. 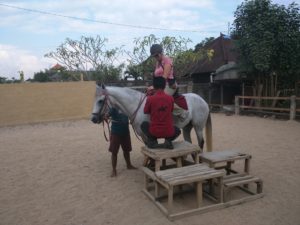 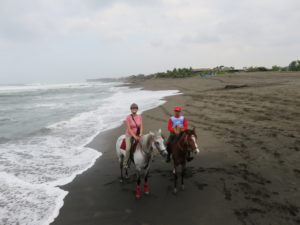 Antonio was great and he went out of his way to ensure that I had a wonderful experience.  He stopped to pluck flowers from trees that I had admired and he took pictures throughout the adventure.  Although I’d arrived shortly before another couple, he still took me out separately which I appreciated.  Ryan had registered me as an experienced rider and Antonio pretty much left me alone and let me do my own thing, especially once we arrived at the beach.  He was a legitimate jockey from Java and he smoked me when we raced.  His horse kicked up enough sand that Ryan laughed as soon as he saw me. 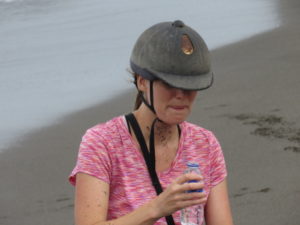 Look at my neck!

After walking in the surf, galloping from one end of the stretch to another, and of course getting in as many rematches against Antonio as poor Crystal could handle, we returned to the stables where I was presented with a much needed towel, a soda of my choice, and a plate of freshly fried bananas.  It was an absolutely wonderful experience that fulfilled a dream I’ve had since I can remember.  Thank you so much Ryan Vredenburg!  I am a very lucky lady.  I won that golden ticket the day I met you. 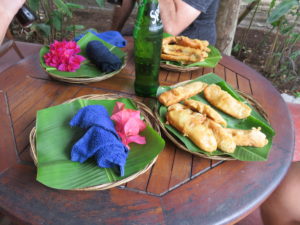 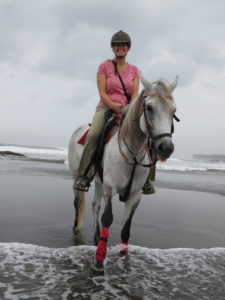