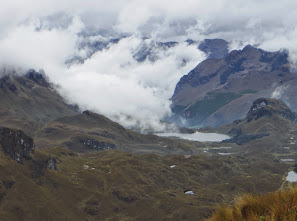 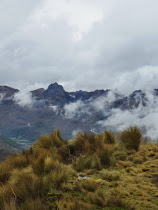 Cajas National Park is only a sixty minute bus ride from Cuenca.  Ryan had read that it is best to visit the park early in the day, to avoid the mist which will impede the view.  So we got up at 5:30 am (earliest alarm to date) and took a taxi to the bus terminal.  Once there, we watched the pigeons and kept trying to get on the wrong bus.  Luckily, the drivers kept us in line.  There was one particular driver who wagged his finger at us as soon as he saw us approaching, saying “No no no (with a bunch of other mystery words).  His message was clear enough however, and we waited for another bus.

The third bus was the ticket and it was good that we waited because OUR bus was very nice, more like a Greyhound, with reclining seats and individual air vents.  I immediately relaxed, as controlling my temperature is the first step in controlling my issues with motion sickness.  The terrain on our way out of the city became lush and green.  The towns (or neighborhoods?) grew smaller and smaller.  The hilly landscape opened to reveal countryside much like that of the kingdom of Rohan, in the Lord of the Rings.

We were dumped beside the road with a small walk down the hill to the visitor center.  As usual, Ryan had done his research and knew that we needed to check in at the office.  We told the woman (the best we could) that we were intending to take Route 2 which is estimated to take around five hours and ascends a mountain up to 14,000 feet to afford the best view. 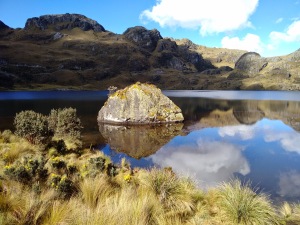 A restroom break and we were off, removing layers as we went.  The early air was cool and the morning sun was shy, darting in and out of cloud coverage.  Route 2, marked in green paint on rocks and planks, branches from Route 1 (the easier trek) marked in pink about twenty minutes down the trail.  I was in high spirits, galloping about, pretending I was a stout dwarf or a lean cool elf entering Rohan for the first time, on a quest.  The mountain we would soon be ascending loomed before us along with a sign that read, Ruta 2 Muy Dificil. 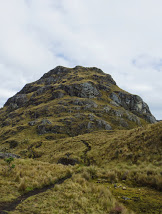 I proposed we make a short video for friends back home, pretending to apply that magical Agua de Florida, which aids in preventing altitude sickness.  You pour the oily liquid into your palms, quickly rub and clap them together three times, bring them to your face and breath in the citrusy, spicy aroma.  Then you run your hands up over your head, brushing the remaining fragrance into your hair.  After all, it had worked for us in the Andes and 14,000 feet was nothing to take lightly.

Ryan wasn’t thrilled with the idea about the video so we began to climb instead, slowly yet steadily following those often hidden green trail markers.  The mountainside, step as steps, rose and opened before us.  Slowly and steadily we continued on, breathing heavily until I suddenly lurched to the side of the trail, vomiting into the brush. 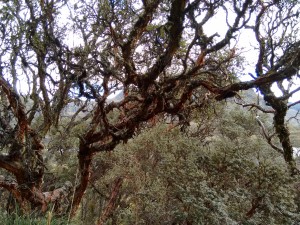 “It’s okay,” I told Ryan, a few minutes later.  “I actually feel much better now.”  At his insistence we walked more slowly and took more frequent breaks, climbing higher and higher until…”I have to sit down!” I said.  I was dizzy and nauseous all over again.  I sat with my head in my hands until my stomach lurched without warning and I was up, tramping through the high brush off the trail, out of sight until I could find a more private place to drop my drawers.  I was sick again, but this time, it was not nausea. 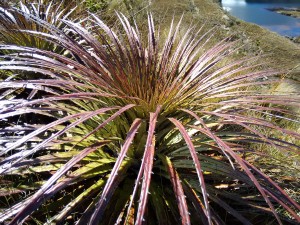 We went down after that.  I tried to continue on, following the pink markers of Route 1 but I didn’t make it very far before I began to feel dizzy and nauseous again.  It was clear that there was only one thing to do after that.  I felt defeated on the way back to the visitor’s center, although I did begin to feel much better.  We passed an adorable group of school children on the way who greeted us cheerfully in English.  “Hello!  Hi!” they said excitedly.  We even found a short-eared rabbit to watch for a while and I convinced Ryan to let me make a video of him munching. 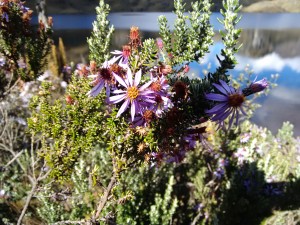 The restaurant was open when we got back, even though it was only quarter til eleven.  We each ordered fish.  My trout was fried and his was dressed in garlic from head to fin.  (His was better.)  Two steamy glasses of rich dark chocolate and my spirits were nearly restored.  We sat in silence taking in the restaurant’s beautiful view of the park and the lake below.  And further out, that mountain–I decided to call it Devils Peak–that had chewed me up and spat me back out. 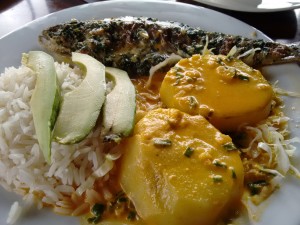 Cuenca, Ecuador–Where to Go and How to Get Back

There seem to be no speed limits in the city of Cuenca.  However, the cobblestone streets help to limit the speed of moving vehicles, as does the congestion.  When traffic is light, like at night, the speed of the moving vehicles greatly increases.   There are also more one-way streets than not and stop lights at most intersections near the city center, at least on one side of the road.  This, we’ve learned, has to do with right-hand turns.  Pedestrians may however, cross on either side or anywhere in-between which means there are always people in the road and cars honking at them.

The driving scene here is loud.  We wake up every morning to car horns and alarms.    For some reason, car alarms are going off all day long, everywhere we go.  People don’t really take notice.  In many cases, the owner is sitting in the car listening to their music as it’s sounding off.  Maybe an elderly couple is waiting patiently in the back seat.  Whether from the alarms or from the horns themselves, the city is not especially quiet.  Taxi’s stop at mid-intersection to pick someone up and the row of cars behind goes wild.  The light turns red, the first car stops, pedestrians begin to walk, and the backed-up row of cars behind bleeps their horns with impatience.  The first car does not move and the pedestrians do not look, but the horns sound their protests all the same.  Inside the honking cars, the drivers maintain bored expressions and relaxed postures.  Only their hand moves from the wheel to the horn and back.

Recent experience would show, however that riding in these cars is not nearly as relaxing as these drivers seem to be insinuating.  Yesterday, Ryan and I walked over two miles to the biggest mall in Cuenca (Mall del Rio), which by the way has a pet store!  It also has something very much like a multiple level Walmart called Coral Hipermercado where we finally found some food products to buy–snacks and water, mostly.  With our hands full of goodies, we decided to hail a cab to take us back.

The demand for taxis in that area was high, so we had to be a little aggressive in order to get one.  I ran up to one that had just stopped to unload passenger and the driver was nice.  I’d reached the cab slightly before another man, and he told him I was first.  At least I think that’s what he said because my competition vanished.  When we climbed in, there were nothing to clip the seat belts into, so we both went without.  I got car sick with all the sudden stops and starts, although my window did work, which definitely helped with the nausea.  At one point the driver had to slam on the brakes and one of our huge water jugs lurched into the front between the two seats.  We did however, reach our destination safely and it only cost $2.50 to drop us at the city center, which is only a few blocks from where we live..  It was a rather intense ride, but it sure beat walking another two miles carrying groceries.  I would definitely do it again. 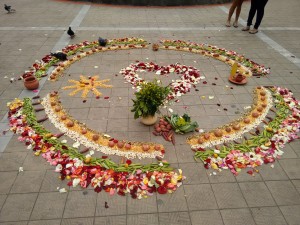 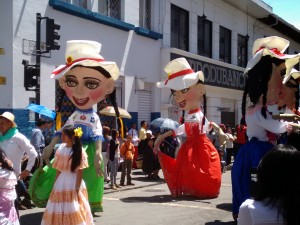 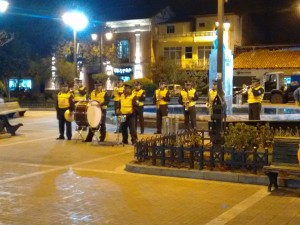 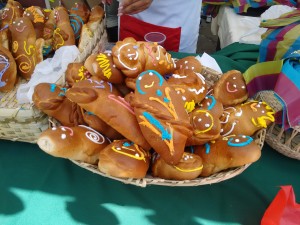 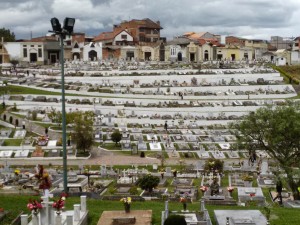 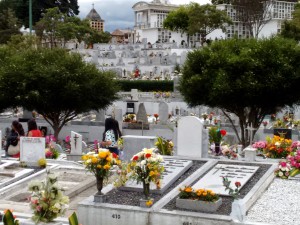 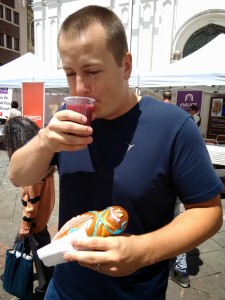