Earlier today, Ryan and I took a short scooter ride from our house in Phuket and visited Monkey Hill.  I was very happy to have Blue Betty not only so we didn’t have to make the climb on foot, but also in case we needed to make a hasty getaway.  The monkeys of Monkey Hill are notoriously brazen and they can even be aggressive when you don’t give them what they want.  I was surprised how many there actually were up there, along with dozens of stray dogs.  They all (monkeys and dogs) appeared to be well fed and flourishing.  I’m sure it helps that they have many visitors to keep them fattened up. 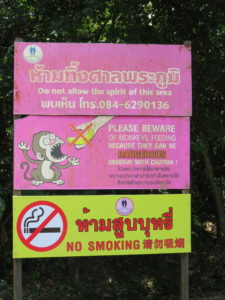 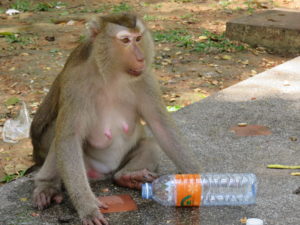 Although they seem to have food in excess–there were piles of unopened, uneaten bananas ripening away in the hot sun–the monkeys were curious to see what new gifts the recent groups of visitors had to offer.  We were not among them.  If fact, we were lame.  The only things I brought were my camera and my party whistle to use in case of an emergency.  The monkeys didn’t take much interest in us and I was happy.  It was enough to watch them interact with more fearless travelers.

There were monkeys of all shapes and sizes.  Every now and then someone would feed one by hand.  Meanwhile, a mother would case the parked scooters carrying an infant around under her belly.  There were groups enjoying an afternoon grooming session.  Some were taking naps while others swung from branches in nearby trees.  I hung out with a relaxed group of mothers and their babies.  They were very tolerant of my presence and I enjoyed just sitting quietly nearby observing them.  It was a wonderfully mellow scene. 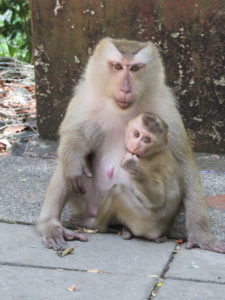 When all was said and done, Ryan and I made it out without an incident.  Neither of us were frisked, scratched, bitten, or maimed.  No feces were thrown.  There were no surprise attacks.  I didn’t even have to use my whistle.  While it probably helped that we exercised some caution, I’m sure that there was a certain amount of luck involved as well.  Some–and I’m assuming that these were the ones with the especially delicious treats–were not so lucky.