I was thrilled to hear that a women’s horseback riding drill team was coming to Ajijic.  (Drill team on horseback? How cool is that!)  We heard about the event from some friends and I excitedly jotted down the date, the time, and the place in eager anticipation.  This was my first mistake. 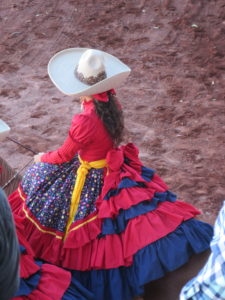 We showed up on the expected date at the expected time only to discover that we had come on the wrong weekend!  It took us a while to figure this out, but we eventually purchased our own Guadalajara Reporter.  When we did, we saw that to my great relief, the event was actually going to be held on the following weekend.  At least we hadn’t missed it, and when it did come, I was determined that we would be ready for it! 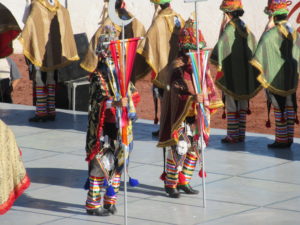 My husband and I hadn’t been in Ajijic long and we hadn’t attended many events.  Therefore, when we heard that this is a VERY well attended event and that seating (especially in the shade) is limited, we decided to arrive early.  This was our second mistake. 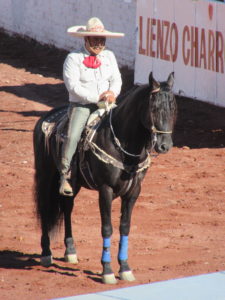 The event was scheduled to start at 4 pm.  To make sure we could sit in the shade and guarantee a happy husband (Ryan does not do especially well in the heat and he’s not a huge horse fan), we arrived around 3:30 pm.  When we did, we found that the event wasn’t even open.  The gates were closed and there was no one around to take our $20 MXN pesos (about $1 USD).  So we waited.

Someone showed up around 4 pm and let us in, along with the small group that had gathered around the entrance.  As you can imagine, the Ajijic Charro Ring had a lot of available seating in the shade.  But this was okay as we had our choice of prime seating.  While local families and groups of retired ex-patriots continued to slowly wander in and fill up the stadium over the next forty-five minutes, young people around the ages of twelve sold us alcoholic beverages at our seats. 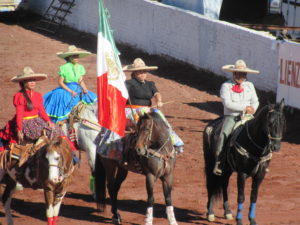 While we waited for the stage to finish being assembled down in the center of the charro ring, we were entertained by two “charros” on beautiful dancing horses.  Mexicans love their dancing horses and I thought that these were especially impressive.  They were glossy of coat and light on their feet.

Still, we waited on the assembly of the stage.  It made us laugh that these individuals had evidently woken up “early” to come two hours ahead of time to assemble the stage.  (They had been thanked over the loud speakers.) At quarter-til five, the stage was finally ready.  The sound had been checked and many of the gringos were not happy with the volume.  A few even felt the need to yell down to the sound crew, insisting that the music be turned down.  True, Mexicans do love their loud music, but these gringos seemed to have forgotten that they were in Mexico. 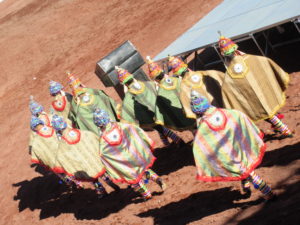 After two hours of loud music, singing, and dancing, the stage was torn down.  Luckily, this took far less time than it had to assemble.  Almost three hours after we had arrived, we finally got to see the drill team perform.  They entered in beautiful flowing skirts and the two teams each performed their short routines, lasting 3-5 minutes each. 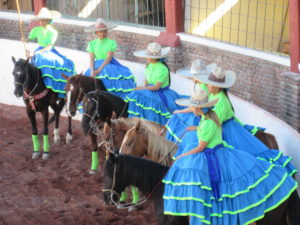 Although we had been expecting four competing teams (and much less music), the event was enjoyable and interesting nonetheless.  We learned several important lessons that day: 1) always verify the facts, 2) never arrive early, and 3) just go with it–you’re in Mexico.  🙂