One of the most interesting things Ryan and I have done since arriving in Ho Chi Minh City is attend the Golden Dragon Water Puppet Show.  This was a very fun event, despite the rat that ran behind our feet (no big deal) and that fact that my seat malfunctioned.  It was a theater style seat and when I unfolded it, the darn thing came right off.  But no harm, no foul.  They had it reattached by the time the show began.  We were seated in the fourth row, eagerly anticipating some puppet action. 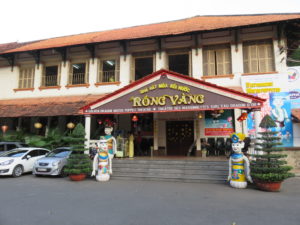 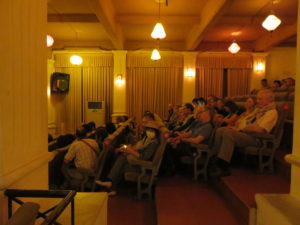 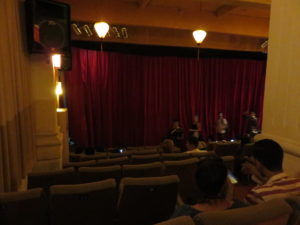 This was the first real puppet show that I’ve ever attended and I considered it to be a bonus that it took place in the water.  I mean, how cool is that?  I’m pleased to report that I was not disappointed (although I think Ryan was just generally confused).  It was awesome!  The show lasted for fifty minutes.  The music was live and each section had different puppets with a seemingly different story. 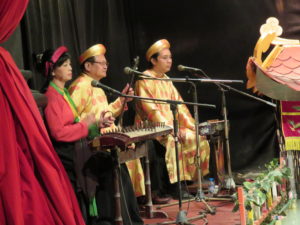 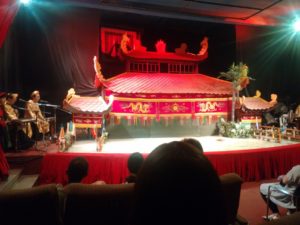 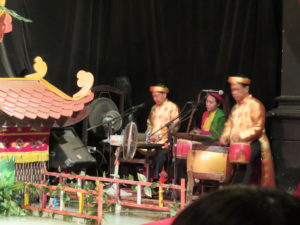 To be entirely honest, I have no idea what was going on as the puppets all spoke Vietnamese.  I’m not sure if the sections were related or if they were separate stories told in a random order.  But no matter.  I chose my favorite bits, mixed them up, and here’s what I think was happening:

Once upon a time, in a land far away, there was a small fishing village called Pu Pu Fhu.

The the fish were abundant and fat.  As a result, the village prospered.  The people were well-fed and and all were content.

Then one day, everything changed with the arrival of Zesty Cat.  Zesty Cat terrorized the villagers and frightened away all the fish.

The peopled searched far and wide, but there were no fish to be found, such was the wickedness of Zesty Cat.

They traveled so far that they eventually came across and ancient tortoise who told them exactly what they needed to do.

The people made offerings to their fishing gods, praying that the fish would return so that they could feed their grumbling bellies.

In answer, the water dragons appeared and did their water dragon dance which frightened off Zesty Cat for good.

The fish returned and the villagers were happy once again.

One Response to HCMC, Vietman–Enjoy the Show