As I have already mentioned, one of Ryan’s New Year’s resolutions for 2017 is to try 100 different food/drinks.  The longer we’re in Vietnam, the more I’m discovering that I’m also trying an assortment of new things, whether or not I intend to do so.  Here are some of the surprises we’ve found on our plates so far.  Some have been more surprising than others.

These crispy little critters were just cooked right in.  They weren’t terrible to the taste, if you could get past the texture.  I actually thought they were a little bland, but I’m sure the sauces on the table would have fixed that right up. 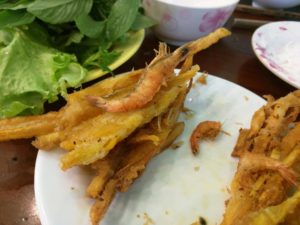 In truth, Ryan hasn’t been nearly as adventurous since he ordered these.  When they came out, he wasn’t sure what to do, so he just ate the whole thing and the lady that worked there looked horrified.  After the first one, he left the heads and tails… 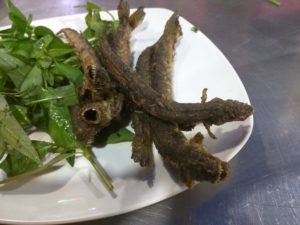 I still don’t know what these were but I’m thinking that they weren’t actually testicles (although I’ve only head fried testicles, so I don’t really know).  They were pretty dense and somewhat chewy with less flavor than I’d expected.  Again, I think adding spice is expected, it’s just a shame I really can’t tolerate much at all… 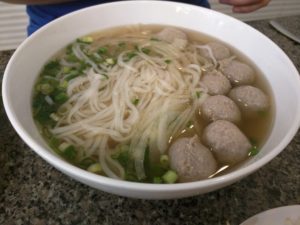 This place was pretty interesting.  We tried the octopus and some pork.  Both were good with lots of flavor and we actually liked the texture, which was surprising to me.  A little rubbery here, and little crunchy there, not too bad at all. 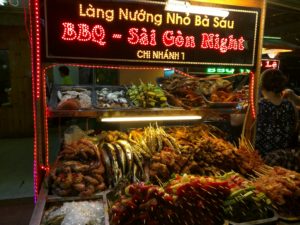 We found that little tidbit floating around in our soup.  It looked kind of like an eyeball.  I couldn’t get up the nerve to try it but Ryan did.  He said that it popped and a paste-like substance squished out…we still haven’t figured out what it is but I’m pretty sure it wasn’t an eyeball. 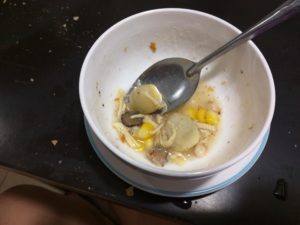 I’ve come to learn the hard way that the simple, non-assuming banh mi can kick my ass in the spice department.  Every time I bite into one of those hidden peppers, my world ends for about fifteen minutes.  Not fun.  Not fun at all.

It was a dark and humid night and I had finally decided to brave the mysterious world of seafood and order my first Vietnamese fish.  I thought crispy fish would be safe.  After all, we’d had our share of fresh fish in Colombia and they were always good.  You just had to give it a good picking through with your fork first.  However, this one arrived with chopsticks, and I was at a complete loss for words. 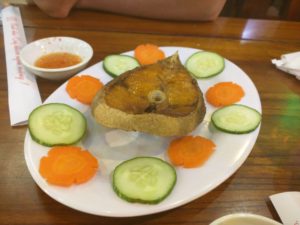 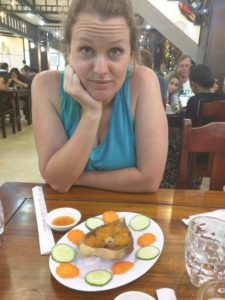 Same dark and humid night.  I did manage to find a silver lining.  When Ryan’s broiled fish came out–also accompanied by chopsticks–I considered myself lucky.  (Although his had surprisingly good flavor.) 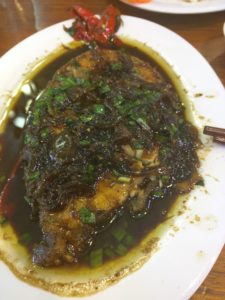 This southern Vietnamese dish consists of thick rice and tapioca noodles covered in pork, drenched in coconut cream dressing.  I loved the idea of this dish, but the consistency of the noodles and the strange mix of flavors were a little off-putting.  I think the truth of the matter is that it just looked pretty gross, and I never got past it. 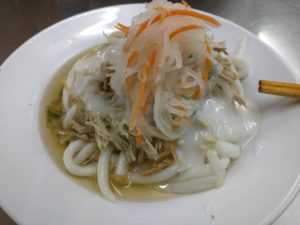 So we knew what we were ordering this time, but we were curious enough to do it.  One or two pieces were good, but after that, all I could taste was the dressing.  It was definitely worth the try, but not something I’d likely order again. 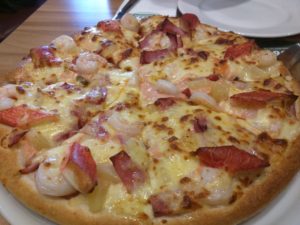 The result of this culinary craze is that I’ve developed a food suspicion.  When my order comes I have taken to looking everything over very closely before popping it into my mouth.  Sometimes I find that the coast is clear.  Other times however, I find that I’m not so lucky.  Instead of tasting the tempting morsel I thought I’d ordered, I taste fear.  It’s a flavor that has become all to familiar.  Now, it seems that there is only one thing left to do.  Have courage and look to the silver lining, which in this case is weight loss.  Little did Ryan and I know, we were achieving both of our goals simultaneously.  Ryan gets to try new things, and I’ve lost ten pounds!