Santiago, Chile–Lost in the Big City 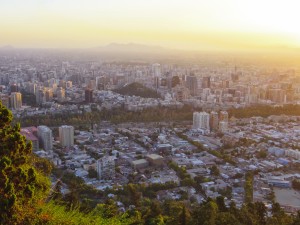 It is very easy to get lost in Santiago, Chile which has 6.3 million people.  For two urban Wyoming kids, this is pretty huge.  The interesting thing is, that once you get lost in the oddly designed streets of this city, it doesn’t necessarily feel like you are lost in Chile.  Forgetting the obvious language barrier for a moment and the sure knowledge that all the signs are written in Spanish, Santiago could seem like any other city. 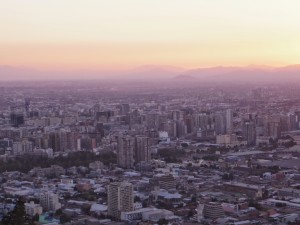 So, once lost, here are some initial observations.  First, you will know that you are in the desert.  The ninety degree sun beating down onto your bare shoulders will settle this.  If not, look around and try to find a tree that isn’t in a park.  In addition, it appears that you are stuck in a bowl with bare-looking mountains all around.  You should not feel too bad, when you fail to realize from this distance, that these are the Andes. 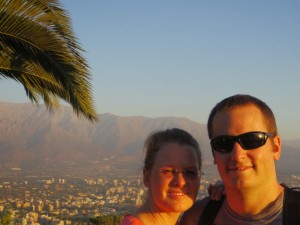 While the air in Ecuador smelled of bread, the air on the streets of Santiago smells of cigarette smoke, garbage, piss, or fish (if you are near Mercado Central).  It may seem odd to have access to such excellent fresh fish in this apparently dry place, but there it is, every kind imaginable, stacked in neat rows of fishy stench among its spiky and tentacley cousins.

If one does not go for seafood (and this would be a shame), there are a lot of hot dogs bursting with more mayo and avocado than a person could ask for.  The food is generally very hearty, with corn and meat pies (pastel de choclo) and plates of fries infused with steak, onion and fried egg (chorrillana).  There is obviously a heavy influence of German cuisine and beer along with the more native (and super yummy) pisco sour. 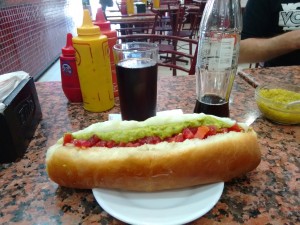 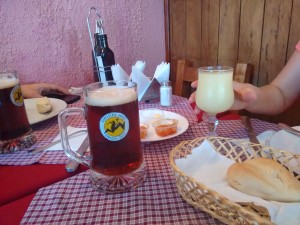 Back on the streets, you will likely blend in fairly well.  People of every shape and size and color are out and about wearing terrible ballooning parachute pants or jumps suits.  Young attractive women may be seen in tall-wasted shorts and belly shirts.  The more you wander, the more likely you will be joined by a wandering dog or two.  One thing to note is that they generally look very healthy and are often Lab crosses or German Shepherds who look much like the police dogs accompanying their officers around the city.

Follow the liberated dog long enough and you will eventually wind up in a park.  At last, there will be shade provided by an abundance of trees.  Dirt paths meander their way around fountains and playground equipment.  The local law has since abandoned their big beautiful dogs and taken up a mounted steeds.  They will sit in their line of big Warm Bloods in their tall black riding boots looking serious and severe.  Out of the corner of your eye, the dog, homeless as it appears to be, climbs into a little house built just for him.  He is not homeless after all, nor are you lost.  You are in the park and your home (at least for the moment) is right over there, waiting. 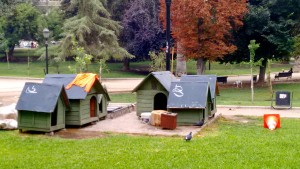 34 Responses to Santiago, Chile–Lost in the Big City