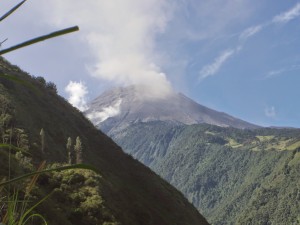 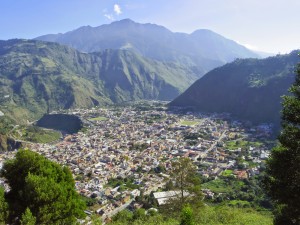 It has to be said that Banos, Ecuador is one of the most adventurous places a person can visit.  For starters, it’s a city of about 13,000 people nestled in the jungle at the foot of an active volcano (Tungurahua).  While we only spent two weeks there, they were the most adventure-packed fourteen days a person could ask for. 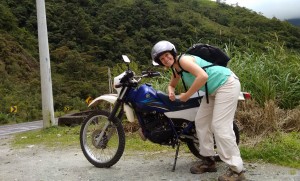 Let me just say, Ryan on a motorcycle…Oh Yeah!  He climbed on top of that wild machine, revved up the engine, and I thought, “Wow.”  With my helmet mostly strapped securely in place (they didn’t have a child-sized one), I climbed on behind him.  We spent the next four hours driving along “La Ruta de las Cascades” (the Highway of the Waterfalls).  Ther are nineteen waterfalls along this route.  The biggest and most amazing waterfall (Pailon del Diablo) actually allowed us to crawl through a tunnel behind it.  Although we had climbed into our raincoats beforehand, we were still fairly misted by the time we had taken our pictures and crawled back out again.  Very cool.

The restaurant serving the best and most inexpensive almuerzo (set lunch) was called Casa Hood.  It showed free movies every Tuesday and even offered yoga classes.  The only catch was that the almuerzo was always vegetarian.  This was definitely new for two country bumpkins from Wyoming.  For dinner, we mostly frequented the pizza cones at Conopizza beneath our apartment, which I quickly grew to appreciate. 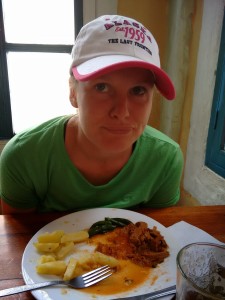 No meat for Amanda.  Go vegetarian or go home!

Just because you’ve seen one giant statue doesn’t mean that you’ve seen them all.  Ohhhh no!  After we had climbed over 600 steps to look upon the statue of the lovely La Virgen del Agua Santa (Mirador de la Virgen del Agua Santa), the very next day we climbed to the top of Bellavista, which is a lookout high above Banos, to see a giant cross.  To be fair, both of these vertical treks produced rather impressive views of the city.  Then, one night in the dark,  we again climbed La Virgen anticipating a promising fireworks show.  While there were no fireworks that night, we were right up in the low-drifting clouds.  Watching them mystically pass through our faces was defiantly worth the walk. 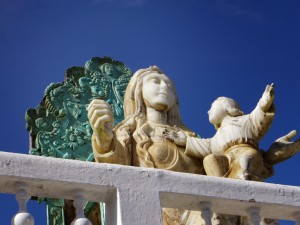 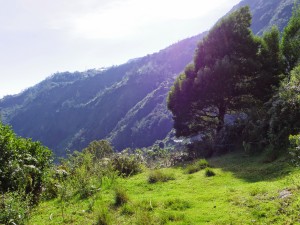 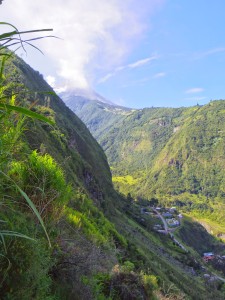 Deep in the heart of the jungle, up a dreadfully winding road and apparently adjacent to a lovely older lady’s property, Ryan and I had our first Zip Lining experience.  After the first one, in which I almost puked, I became a real pro, flying through the air upside down and superman style, banging on my chest and giving a credible George of the Jungle impression.  There were six zip lines in total and we both were very happy with the expedition. 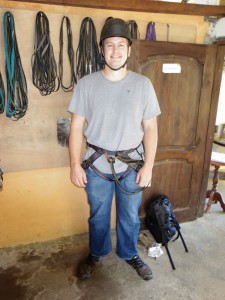 All of these feverish outdoor activities will make a person quite rough around the edges.  And to wash our soiled and smudged clothing we heroically turned to our giant bath tub, which initially wasn’t good for much else.  If we thought washing our clothes in the tub was hard, we had another thing coming.  When it came to bathing, I found myself submerged in only three to four inches of lukewarm water splashing around like a seal every time I turned over.  Ryan did not fare much better for there was no shower curtain and I’d spend a good deal of time mopping up after one of his showers.  Eventually though, we got the hang of things.  Ryan was able to adjust our water heater, thus providing me with a full, hot tub of water in which to soak my sore bones.  Thus, I regained my dignity.  In addition, we found a local laundry service that charged by the pound.

Shifty tub washing?   Well, have no fear.  Whatever traces of shoot or smudge remaining were sure to be removed once we…wait for it…climbed down rushing waterfalls.  Oh yes, we did indeed challenge the mighty falling water and mostly arrived unscathed.  And ok, you were right.  We were wearing very unattractive wet suits, for in any true adventure, sacrifices must be made.  I wore a smelly rubber seal suit, tasted fear, and had a truly marvelous time. 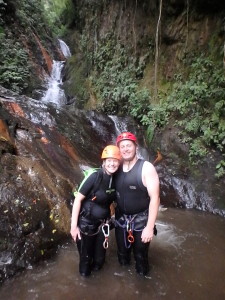 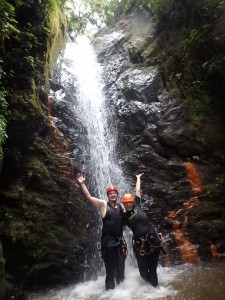 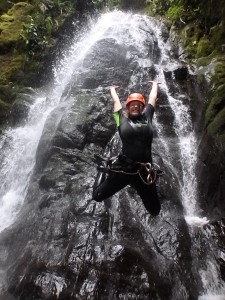 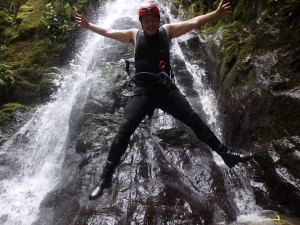 After the sweaty wet suit shenanigans, we needed another romantic motorcycle ride.  This time we took it all the way up to La Casa del Arbol where we sailed out over the edge of the mountain on long roped swings and contemplated the fear of falling and the pain of sudden death.  Talk about an adrenaline rush.  Weeeee! 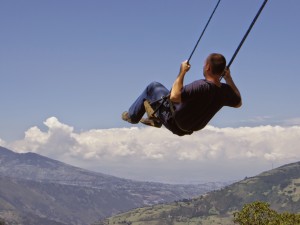 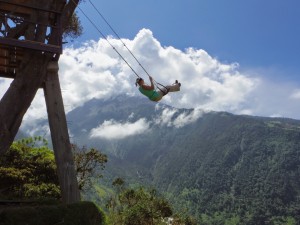 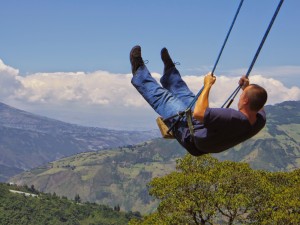 If one takes an uncomfortable two-hour bus ride, they might reach Puyo where they will be dumped by the side of the road (this is kind of a big thing in Ecuador).  From here, a taxi will magically appear to drive them to the Puyo Animal Rescue.  Don’t be fooled by the name folks, because this is all about the monkeys—five different types of monkeys to be specific.  One look at their furry little faces will make you think that you’ve died and gone to heaven. 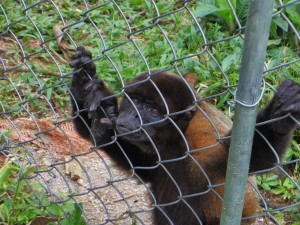 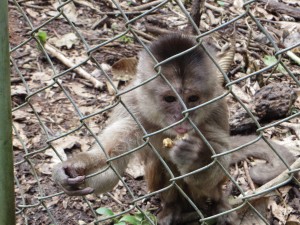 The best thing about the Puyo Animal Rescue is that, once these adorable little pet monkeys have been collected from their bored or irresponsible owners and have bonded with other sad stragglers, they are all reintroduced back into the wild as a family.  And they all live happily ever after.  The end.