This year, to celebrate Christmas, I have joined the Cuenca Dance Mob.  They meet every Tuesday at 4pm at Café Eucalyptus.  Joined by about a dozen enthusiastic expats aging fifty years and above, we have been jamming it up to Mariah Carey’s “All I want for Christmas Is You.”

Dance Mob, I have found, is serious business.  We pay a dollar admission (for returning members only) and wear matching red sparkly scarves.  If you’re new to the Cuenca Dance Mob, five dollars will get you into your first lesson and twenty dollars will apparently pay for an entire month’s session. 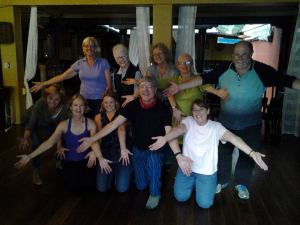 Most of our members are from Texas or Tennessee.  They come early or late, sitting along the sides in chairs to rest their knees when they get too tired, while the rest of us get our sweat on.  And we do sweat, people, jumping in line to do the can-can, the Macarena and my favorite, the sexy circle.

Our instructor David is a real hoot.  “Sexy circle,” he yells.  “Give them sex now.”  As a younger man, he specialized in law and disco.  Now he coordinates and facilitates all the routines for the Cuenca Dance Mob.  He is fairly strict, leading us out on the floor for nearly forty-five minutes before we are entitled to a break.  I have noticed that I am the only one who wanders downstairs for my weekly mojito—scrumptious things—and Barbara, with pink strokes in her hair laughs every time I return carrying my prize, right in time to “take it from the top.” 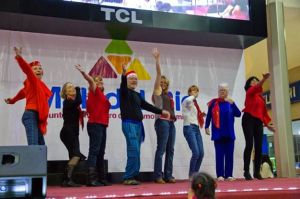 All I Want For Christmas Is You

I’m not going to lie, when I mastered that last move and was chosen by David to be one of his two “Dance Babes” (stage left) I was thrilled.  When it comes to dance, I never get chosen for anything!  It was the roller-coaster move that was giving me fits, but I mastered a slightly modified version of the move and that was okay with David.

I was growing fairly nervous as the date approached for my first actual flash dance.  David asked us all to meet early on Friday morning at the Mall del Rio where we would be performing up on stage later that afternoon.  He had very cleverly managed to finagle a spot right after the International Choir of Cuenca were to perform, so the seats were supposed to be packed. 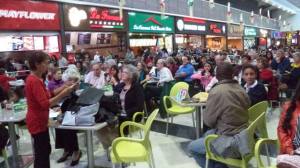 We got to the mall so early (9:30) that no one would let us in.  With our limited Spanish, Ryan and I had no way of telling the security guards (though not for lack of trying) that we had to come early for a very important rehearsal.  Luckily we found David and we followed him around the premises until he could convince one of the guards to let us in to ensayar.

At last, our group was granted admission.  “Where are my dance babes?” David called.  “I need to pull them up on the stage first.  Is everyone ready?”  Trust me, we were.  About ten hours later, our performance (though slightly flawed) seemed to have been enjoyed by all and was much more popular, if I may be so bold as to say, then the International Choir of Cuenca. 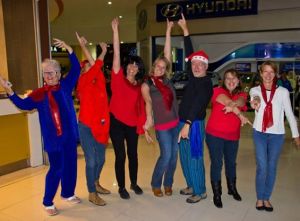