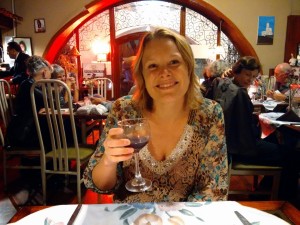 I’m going to be completely honest.  On the morning of November 27th, I woke up in Cuenca, Ecuador and had no idea that it was Thanksgiving.  Ryan had gone out an hour earlier and came back with some orange tiger lilies.  When he presented them to me saying, “Today I am thankful for you,” I thought, Hey, how sweet.  Then he laughed and said, you really don’t know what day it is, do you?

I spent the remainder of the day writing about being attacked by a turkey.  You see, this did in fact happen, on a lonely little road in Wyoming called Zig Zag that was a beast whenever wet.  My book–about family and friends back home–was coming along smashingly well and so I followed “Turkey Attack” with a chapter called “Family Feast,” which I later deleted and rewrote.  The truth was, I was sooo thankful to get to spend the day writing. 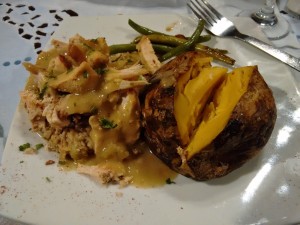 We went to dinner at my favorite restaurant which is called Don Colon’s International Café.  Once seated for our seven o’clock reservation, we were served an amazing sangria, along with a steaming plate of turkey, dressing, sweet potato, and green beans.  The desert was a sort of pound cake with strawberries—nowhere near sufficient to curb this woman’s Thanksgiving appetite, and so Ryan took me to my other favorite restaurant and ordered an entire pitcher of sangria.  There I got to choose from two pages of fabulous deserts.

The result, I’m displeased to report, was sour stomach.  I ate so much at La Fornace that I became physically ill.  Not the sort of Thanksgiving ill where you just put on some sweatpants and lay down for thirty minutes and go back for another round of pumpkin pie, but the kind of ill where I groaned and said, “Please take me home right now!”  The kind of ill where I stumbled home nauseously and went right to bed.  What a sad way to end that beautiful Thanksgiving evening.  Luckily, I still remembered to roll over, pat Ryan on the arm and mumble, “I’m thankful for you.  I’m thankful for our exotic adventure,” before falling fast asleep.  I may have rolled over once during the night, but that was about it. 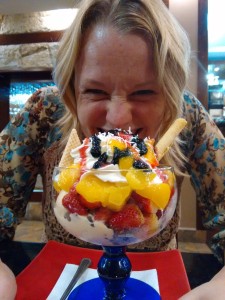 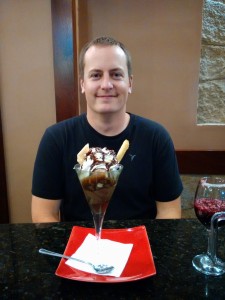 17 Responses to Cuenca, Ecuador–Give Thanks