Ryan must have felt pretty bad after the Cajas elevation sickness ordeal because the next day we caught a bus and rode about thirty minutes to Banos.  This is the smaller Banos at the outskirts of the city known for it’s amazing and restorative hot springs. 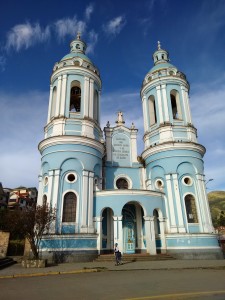 We had a nice young man who spoke fairly good English supervise the process.  After we had changed into our bathing suits and settled our belongings into a locker, he directed us toward the steam bath, which was essentially a VERY HOT steam room.  The room was so hot, in fact that we were not able to stay for the ten minutes he’d instructed.  Luckily we were the only patrons present and so we snuck in and out of the room every few minutes.  My contacts quickly became useless and I somehow burned my nose and throat in the process.  But we were in good spirits, laughing as I bumped into things on my way in and out of the room.

I looked like a drowned rat by the time he came to collect us.  Makeup, modest as it was, had apparently been a poor choice but the cold shower we jumped into next took care of the black streaks running down my cheeks.  It was only after I had done a fair amount of frantic scrubbing that the attendant asked us not to submerge our heads.  Ooops.

He escorted us to the red volcanic pool and half explained, half mimed, rubbing red grainy dirt in clay bowls all over our bodies.  If we had been laughing in the steam room, we were really laughing now, half submerged in red water, rubbing mud onto each other’s backs and smearing it all over our cheeks and chests.  The mud had to dry, and so, for another ten to fifteen minutes, we lounged in chairs in the sun, baking the mud onto our bodies and becoming more and more immobile as our skin hardened. 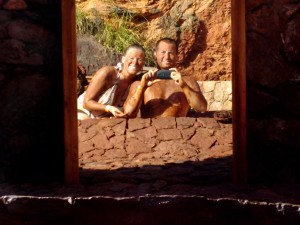 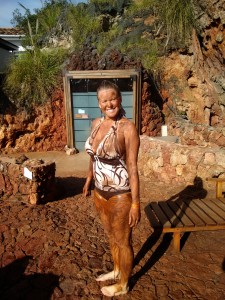 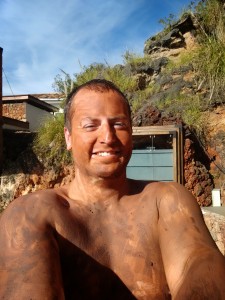 The attendant herded us to two clay huts that turned out to be showers.  I wasn’t sure how long I was supposed to stay in there so when I came out, about five minutes later, Ryan was already in the blue volcanic pool, repeating the ritual with blue mud.

More smearing, more baking, and more showers and we wandered down into a dark cave to find two underground thermal pools.  One warm and one cold.  We were instructed to stay in the warm pool for ten minutes, then move to the cold pool for a few minutes and then repeat the process.  Soft instrumental music played in the background and the air smelled strongly of earth and the burning vanilla candles lighting the stone steps.

The first dunk into the cold pool–and a dunk is exactly what it was–shocked all my senses.  I didn’t even submerge all the way.  When I crawled back into the warm pool, my entire body tingled.  The next dunk I took more seriously, submerging up to my neck and sitting for at least thirty seconds, hoping to entice an even greater tingle from the next round.  Although I did achieve a great tingle when I jumped back into the warm pool, we were apparently supposed to end on the cold dunk and so we were both sent back into the cave to dunk again. 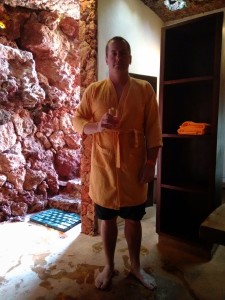 Big Guy in a Little Robe

My yellow bathrobe was a welcome sight on our return.   Ryan’s was much too small and I laughed at him all the way to the next room that contained the steam boxes.  I shed my bathrobe and crawled in, allowing our attendant to fold the boards down around me, sealing me in.  He wrapped a towel around my neck to keep any steam from escaping and I laughed at Ryan trying to escape from his bathrobe.  It kept getting stuck over his forearms.  I was grateful that the temperature of each box could be controlled by a small lever found inside, otherwise, I would have fried.  We both sat happily through two rounds and when we were finished and had taken our cold showers, we were brought two glasses of bright pink tea. 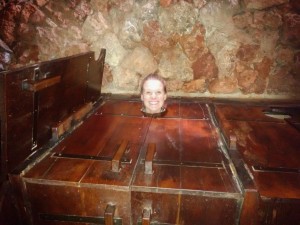 We lounged by the open thermal pools after that and I fell asleep in the sun.  When Ryan woke me, thirty or forty minutes later, we enjoyed lunch by the pool from the spa’s Dragonfly restaurant.  I had a mango milkshake and some kind of steak with mushrooms.  Ryan had a shrimp dish.  By the time we left the spa we were both burnt to a crisp but our spirits were soaring.  We have been happily peeling ever since.