Christmas came early this year when my parents announced they were going to be able to visit us all the way in Thailand!  This was an especially big treat because it’s difficult for my dad to get time off work.  It’s also hard for him to take a lot of days off in a row, which becomes more important the further from home you want to travel.  When he told me that he was going to be able to stay for ten days, I couldn’t believe it!  They showed up ready to explore, relax, and have a great time. 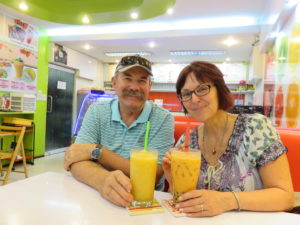 Fresh off the plane and getting rehydrated 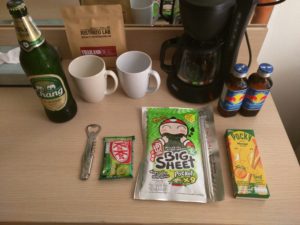 Before my parents came to visit, I asked them whether or not they like spicy food.  It was odd that I didn’t really know the answer.  A good part of the reason is that I’ve always had an embarrassing intolerance for spice so it wasn’t generally on the menu at home when I was growing up.  In response to my question, my dad told me that he was a mild spice guy and Mom could handle medium spice.  I’m proud to report that while they were in Thailand, they were both handling medium to spicy spice surprisingly well.  Unlike me, there wasn’t much they couldn’t eat and they enjoyed trying a variety of local dishes.  We even got them a good sampling of Burmese food and they enjoyed that as well.  I’m pretty sure the food scene was one of the highlights of the trip for my dad. 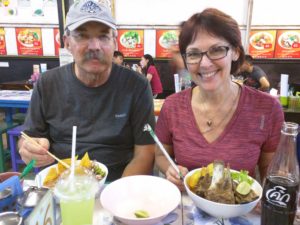 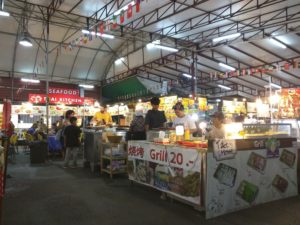 He wasn’t the only one.  I’m a little embarrassed to admit that one of the things I most enjoyed while my parents were visiting was going out to breakfast every morning.  This is something that Ryan and I never do on our own and it was such a treat!  Breakfast is one of my favorite meals of the day and there were a lot of options around our neighborhood that had mouth-watering pictures of pancakes and waffles and toast that I’d been dying to try.  I’d been walking past them somewhat begrudgingly for the past two and a half months.  Suddenly, I had something delicious to look forward to every morning.  It was a great way to start out each day.  Thank you Mom and Dad! 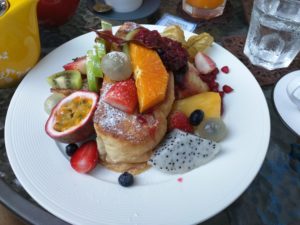 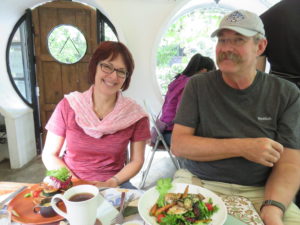 In addition to the food, I think my dad really enjoyed getting out on the trails.  He loves to walk, so this wasn’t too big of a surprise.  I think he especially enjoyed the short 30 minute hike we took up to the hidden temple Wat Pha Lat.  This temple is located in the middle of the lush fortest up the first part of Doi Suthep mountain.  To get there you follow the monk’s trail, marked by orange fabric (from their robes) tied to trees.  The temple complex is very tranquil and there’s some nice scenery along the way. 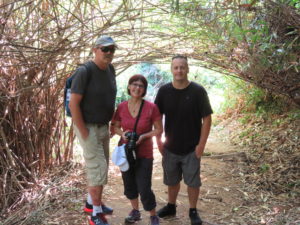 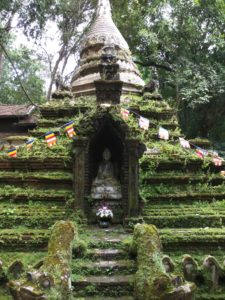 I think one of the highlights of the trip for my mom was climbing the sticky waterfalls.  She fearlessly tackled all three.  I had failed to advise my parents to bring proper footwear and going barefoot was a little hard on my dad’s feet, so he climbed the first one and then he became the designated photographer.  On one of our trips up and and down the trail, we came across a little crab.  It was odd seeing a crab in the middle of the forest and I’m not sure what he was doing there, but like my mom, he was fearless and he held his ground on that trail until we passed.  I was happy to see that when we returned a while later, he had moved on to a safer location. 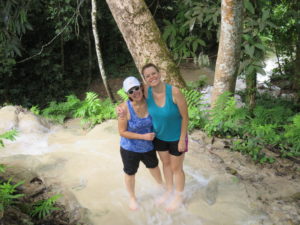 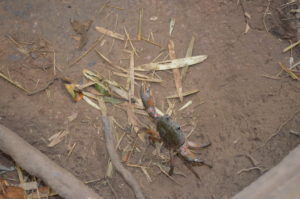 I think my mom also enjoyed visiting a couple of the silk worm factories.  Here we got to see how Thai silk is actually made.  My mom is a fiber artist (among her abundant talent in many other mediums as well) so this was a great opportunity for her.  The factories were both huge and they had a variety of products for sale.  We spent the most time in the first factory.  Mom found some fabric and Dad found a couple of ties and a silk shirt.  They bought me a hat that I’d fallen in love with.  We tried to convince Ryan to get a silk shirt for himself–it’s kind of hard to talk him into going out to a nice dinner when all he has to wear is a black t-shirt–but he politely passed on the offer.  (I think he wants nice dinners to continue to be off the table while we’re still budget traveling.) 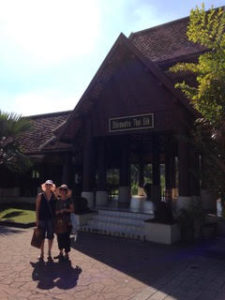 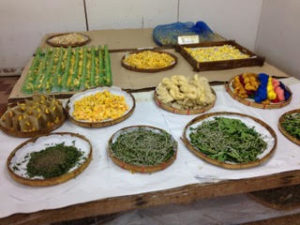 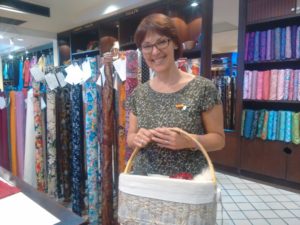 Although we were out and about quite a bit, we also made it a point to relax.  Once again, my parents did a great job, especially my dad.  I’m still convinced that I’ve never seen him so fully relaxed.  This was especially evident when he decided to grab a cocktail before dinner one night.  Although my parents aren’t big drinkers, Dad had been enjoying the local Chang and Singha beers.  Then one night he developed a hankering for a gin and tonic.  Mom’s Lychee Lady won the contest for most interesting beverage selection.  It came out on dry ice and that was one dazzling lady.  It was even more impressive than the Christmas tree out front made of Coke bottles! 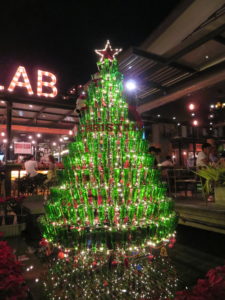 On one of our more relaxing afternoons, Dad and I went out to refill the water and we made a detour at a nearby eyeglasses store to look for sunglasses.  Dad had had his pair for a long time and they were pretty scratched up.  He knew what he was looking for and he found a pair he liked almost right away.  The ladies in the store were very helpful and they informed us of a 3 for 1 sale they were having at the time.  Dad bought his pair of sunglasses, and then he told me to pick out two pairs for myself!  I couldn’t believe how spoiled I was getting.  Needless to say, I’ve had very few shopping experiences with my father, but this one definitely makes it towards the top of my list.  For the remainder of the trip, we went around in matching sunglasses and I loved it!  For our next stop, we were heading to the beach and now we were both ready to really soak up the sun! 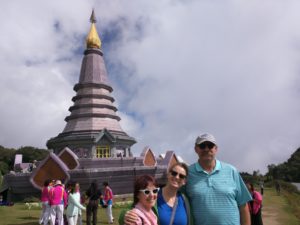 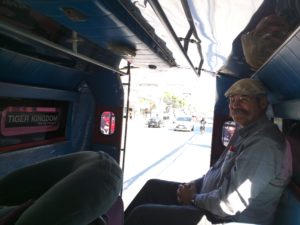 Dad’s songthaew ride on the way to the airport