I’m not ashamed to admit that Tangled is one of my favorite movies.  This is probably one of the reasons my husband knew that I would be thrilled to attend Chiang Mai’s Sky Lantern Festival.  Sure it was noisy, crowed, and chaotic–making it just the type of event I would normally avoid–yet as I watched thousands of paper lanterns light up the sky, only one word came to mind.  Magical.

Throughout Thailand, and in many parts of the world, it is considered good luck to release a sky lantern.  It is widely believed that doing this is symbolic of problems and worries floating away.  In Thailand, these lanterns are often made of oiled rice paper on a bamboo frame that serves to suspend the flame source and keep it away from the walls of the lantern.  Ryan and I bought a medium-sized lantern and a lighter for next to nothing so that we could participate. 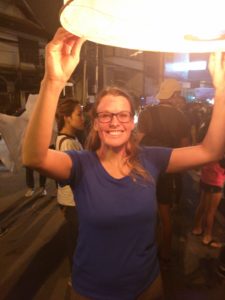 Once we lit the flame source, we had to wait 3-5 minutes while the the lantern filled with hot air, making sure the paper didn’t catch on fire in the process.  It was crowded and we had to manage this while other people lit and released their lanterns all around us.  We even had to dodge a couple that were released too early, which caused them to drift horizontally for a time, before making the vertical climb.  It made for a wild and exciting time.  Unfortunately, not all the lanterns made it.  This one even plunged off the bridge to its untimely death.

I’m happy to report that Ryan and I were sufficiently patient, and once we’d made our wishes, we released our lantern and watched it float quickly up into the sky to join the thousands that were on their way to some unknown destination.  The sky was beautiful and I watched the show for much longer than Ryan expected.  (I usually enjoy fireworks shows for about half-hour before I’m ready to move on.)  The paper lanterns were different.  Ryan practically had to pry me off that bridge.  I could have watched them all night long. 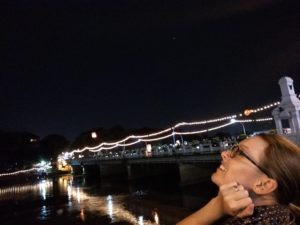