I think both Matt and Sheree enjoyed the quiet, laid-back feeling of Chiang Mai after a bustling Bangkok.  (I was certainly glad to be back.)  Ryan and I hadn’t been living in Chiang Mai long before the arrival of our company, so we had fewer plans than usual.  Knowing Matt and Sheree’s great love of spicy food, we focused a good portion of their visit on finding them a variety of spicy local dishes.  I was truly impressed with how fearlessly they conquered the food in Thailand.  They were happy to try everything, and I think they liked most of what they tried.  They were both fans of khao soi.  This noodle soup is found in Myanmar, Laos, and northern Thailand.  It consists mainly of a curry soup base, coconut milk, hand cut rice or egg noodles, and a choice of protein (although it’s commonly served with a chicken drumstick). 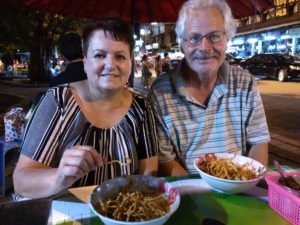 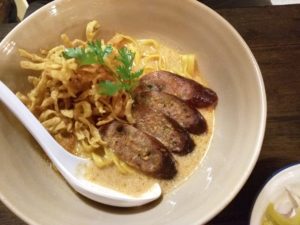 Aside from the spicy papaya salad, I believe that Matt’s favorite dish was tom yum soup which is considered a “hot and sour” Thai soup.  The main ingredients may include stock and fresh ingredients such as lemongrass, kaffir lime leaves, galangal (tropical spice), lime juice, fish sauce, and crushed chili peppers.  We found an especially good version at a very local place off the beaten path.  The small plastic chairs were not accustomed to supporting a person of Ryan’s size and midway through the meal his splintered beneath him, dumping him to the ground.  His considerable impact with the hard floor scared us and embarrassed him, but the locals sure got a kick out of it.  He was a great sport about the whole thing and after that, he was much more selective with his choice of chairs. 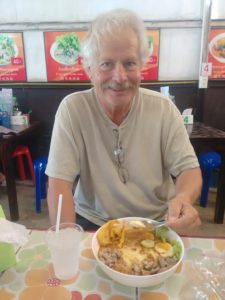 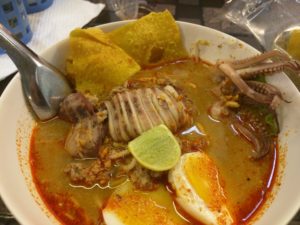 We did do more than just eat.  Matt and Sheree had come a long way to see us and we wanted to show them as much as we could.  Visiting the “Doi Suthep” temple (Wat Phra That Doi Suthep) was one of the highlights of the trip.  This temple is located 15 kilometers from Chiang Mai at the top of the mountain with the same name.  It overlooks the city and offers a nice view.  To get to the temple from the parking lot near the top, you can either climb the 309 steps or you can take the tram, which was most convenient and very reasonably priced.  Once at the top, we had to remove our shoes before entering the temple grounds, which is customary.  Inside there was a beautiful golden stupa (or chedi) and a lot of people, but we took our time looking around the impressive grounds. 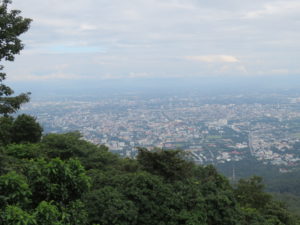 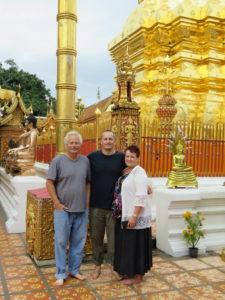 One of my favorite things about Matt and Sheree’s visits is the girl time Sheree and I often get to spend together.  During this trip, we enjoyed some nice (and for the most part, relaxing) massages.  Although we’d asked for foot and calf massages, our massages were performed on regular massage beds and attention was payed to most of the other parts of our bodies as well.  Towards the end they were even bending me and twisting me in ways that I wasn’t sure I should be bent or twisted, and I’ve always been fairly flexible.  It was a good test to tell me that I probably wanted to avoid actual Thai massage in the future.  I think Sheree had similar opinions about the experience.  We also enjoyed getting pedicures.  There were no surprises here.  Just a relaxing hour spent with the world’s best mother-in-law! 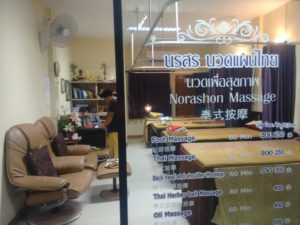 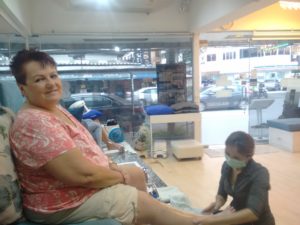 Ryan gets his love of cats from his mom and he surprised Sheree by taking her to Catmosphere.  I’d never been to a cat cafe and I thought it was so cool!  When we arrived we were greeted outside by one of the friendly employees.  We changed into the provided slippers and sanitized our hands.  Then she waited for the escape artist Eve to get distracted before we were quickly ushered inside.  Most of the cats were so used to the constant influx of people that they paid little attention to us.  Sheree however, had a magic bag that she used to entice a couple of the more curious ones over.  There were 26 cats at Catmosphere and by the time we’d left, we’d seen at least 16 of them.  Ryan renamed my favorite Sir Pufferton.  His closely shorn haircut left him with noticeable man boobs.  Poor Sir Pufferton. 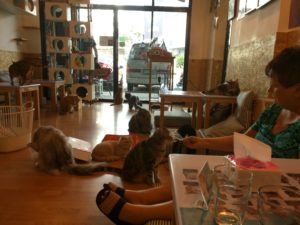 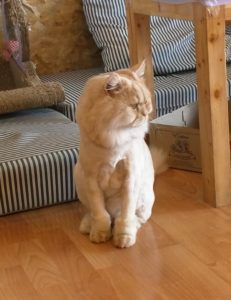 Our time in Chiang Mai was mostly relaxing, and that was the intent.  We’d eaten some good food, seen some sights, and had some hopefully memorable experiences.  It was time for the final part of their adventure, so we loaded Matt and Sheree into the back of a songthaew and we all headed to the airport to catch a flight to Pattaya.  We figured they hadn’t come all the way to Thailand to leave without getting to go to the beach.  I don’t know about you, but when I think of Thailand, I think of white sand and crystal blue-green water (and sharks–but that’s probably just me).  With any luck we’d have some nice weather and giant prawns to enjoy once we got there. 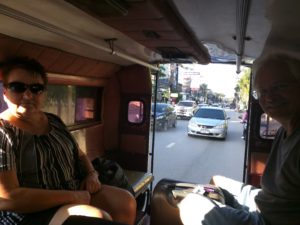