We were so fortunate to have Ryan’s parents come all the way to Thailand to visit us!  Matt and Sheree have always been so good about coming to visit us wherever we go.  So far they’ve visited us in Ecuador, Colombia, Argentina, Mexico (twice), and now Thailand!  We met them in Bangkok for the first part of their visit.  Our plan was to spend a few days there so they could see some of the sights and adjust to the thirteen hour time change.  They arrived tired, but full of smiles.  What troopers! 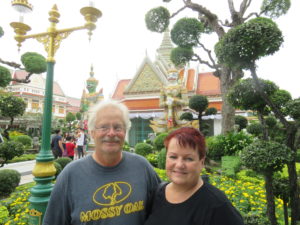 We love you Matt and Sheree!

We happened to be in Bangkok during the one-year anniversary of King Bhumibol’s death.  King Bhumibol Adulyadej was the world’s longest-reigning monarch and he passed away on October 13, 2016 at the age of 88.  He was truly loved throughout Thailand and the country spent a year in mourning.  Then on October 26th, 2017 they held a lavish cremation ceremony.  Many of the regular sights were closed, including the Grand Palace.  However, we still saw some pretty impressive temples. 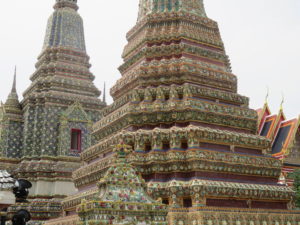 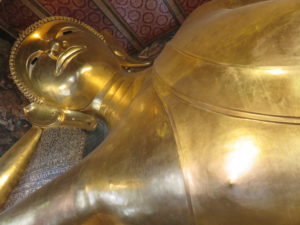 We visited many of the popular tourist sights while we were in Bangkok, including the renowned Khaosan Road.  A vendor tried to sell us grilled scorpion, but other than that there wasn’t much happening.  There was a temporary ban on alcohol in observance of the holiday and I suspect this was a large part of the reason.  We also visited a floating market.  I’ve heard that the food in Thailand tends to get spicier the further south you get which worked out well for Matt and Sheree.  They have a great love for spicy food.  I think that Matt particularly enjoyed the spicy papaya salad.  It was a good way to start our adventure and now we were ready to move on to the next location.  Chiang Mai, here we come! 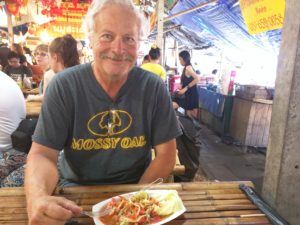 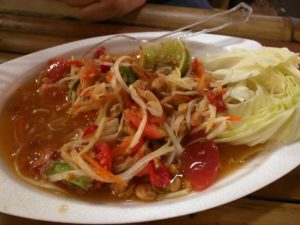