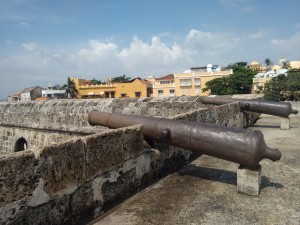 Ye Pirates, have at thee!!!

The port city of Cartagena is located on Colombia’s Caribbean coast.  With it’s 16th-century plazas, cobblestone streets and colorful colonial buildings, Cartagena is reputed to be one of the most romantic cities in the world.  I’d fallen in love with the idea of this city as a child.  All it took was one viewing of Romancing the Stone and I was starstruck.  If only I could have know that twenty years later, I would be lucky enough to be spending my first anniversary in this magical city with my extraordinary husband. 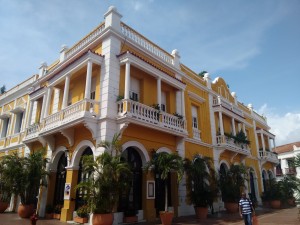 Then the triple-threat struck, leaving no hopes for romance in its wake.

Threat number one: The Heat.  One of the things that I have always loved and appreciated about Ryan is that he is a furnace.  He is very handy to have in a mountain lodge on a cold winter’s night.  But get him into a hot and humid climate and he burns up like a match.  Even hand-holding was more than he could handle. 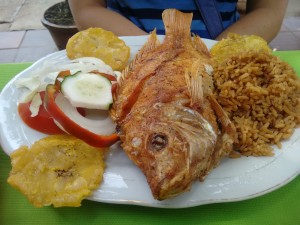 Threat number three: THE FLU!!!  Determined to make our very first anniversary a magical night–despite our unfortunate circumstances–we planned to have a five-course dinner at one of the nicest restaurants in the city, followed by a carriage ride. 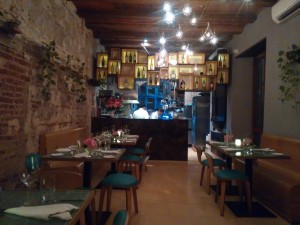 To get to the restaurant, we had to take a cab about twenty minutes to Old Town, the historical heart of Cartegena.  It is surrounded by a thick wall that was built to defend it from pirates and is arguably the most beautiful area in the city. 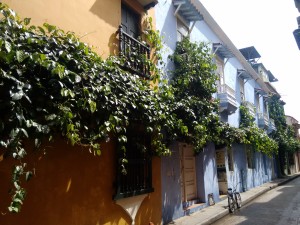 A street in Old Town

Unfortunately, by the time we got there, I wasn’t feeling so good.  I spent a lot of time in the bathroom and by the end of the night, I had only been able to try two of the five courses.  As I have a truly great love of food, you can imagine how much this killed me.  It was the nicest meal we’d had all year and I couldn’t even eat it. 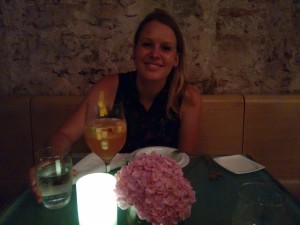 By the next day Ryan wasn’t feeling so great either.   After that, we mostly stayed indoors in our tiny apartment.  We enjoyed the air conditioning and got a lot of rest. 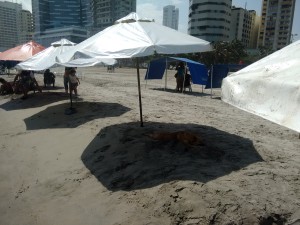 This hot doggy had the right idea.

Luckily, in the last few days of our stay, we finally felt improved enough to wander back outside.  We–and I especially–enjoyed a luxurious beach day under an umbrella.  We swam in the warmest waters I have ever swam in and got an enormous and delectable plate of fresh fruit.    All and all, not too bad of a deal and although it may not have been the adventure I’d had in mind, it was definitely an adventure. 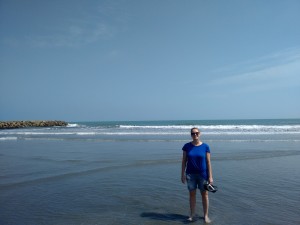