Some of you may have noticed that I’ve been slacking on my weekly blog posts.  While it’s true that I’ve gotten completely wrapped up in my novel, that is not the main reason I haven’t posted since Ryan and I left Medellin, Colombia.  The real reason I haven’t posted anything new is because ever since Ryan and I embarked on our jungle hike, I haven’t really known what to say about the experience other than this: I survived. 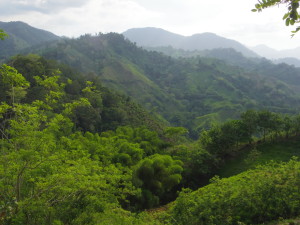 Don’t get me wrong, the scenery was absolutely beautiful.  I noticed this once in a while as I was huffing it up and down for hours on end.  The problem was that, due to the extreme pace of the trek combined with my natural tendency to stumble and fall–and add a pack that was likely far too heavy and the hot and humid jungle climate–I didn’t get many opportunities to look up and take it all in.  Thank goodness Ryan was in charge of taking pictures. 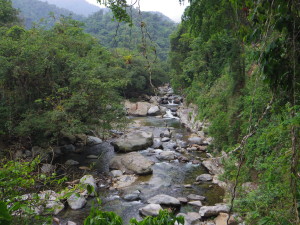 First, a little bit about Ciudad Perdida.  Although The Lost City (Ciudad Perdida) is a relatively new discovery (1972), it dates back to around 800 AD.  This ancient city (now an archaeological sight) was once the home of up to 8,000 Tairona (a local tribe) and is thought to have been abandoned during the Spanish Conquest.   Today, The Lost City consists of terraces, plazas, and tiled roads all carved into the mountainside.  The only way of reaching the city is by climbing 1,200 stone steps through dense jungle.  Not an especially easy feat, and that’s after you’ve already been hiking for two days. 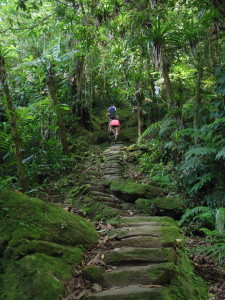 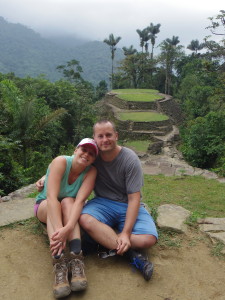 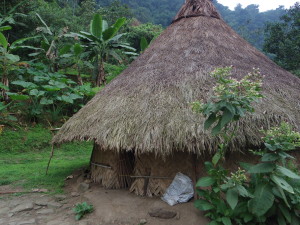 As far as I know, you can only reach The Lost City by joining a tour group.  Whether or not this is in fact the case, Ryan and I signed up with a local tour company to take a six-day hike into Colombia’s Sierra Nevada mountain range to check out the ruins of this ancient city.  As one can only expect when embarking on such an adventure, many unexpected things happened once we went into the jungle, the most important being that we came out five days later, instead of six.  Given the location and circumstances, I know my mother was just grateful we came out at all. 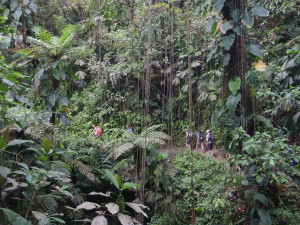 Here are some of the things that might have gone wrong and the reasons my experience did not turn out to be an absolute delight.  The first, unfortunately, was a wardrobe malfunction.  Being that my hiking boots were long broken in and had treated me well on my hike to Machu Picchu, I blame the hot and humid jungle climate for the blisters that erupted along my ankles and the bottoms and sides of my feet.  This happened on the second day of the six-day hike which was poor timing, to say the least. 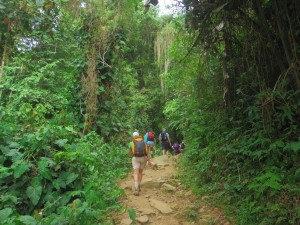 I say six-day hike because Ryan and I signed up for six days.  We are not as young as we once were and are not as light and in-shape as we probably should have been.  That isn’t to say we didn’t try to prepare.  Only a month before, I was running fifteen miles a week and doing yoga 3-4 days a week.  We even did some hill sprinting for a week or two until we had back-to-back waves of company and ate more food than is advisable for any person of any size to consume.  So yes, we tried to prepare but for the most part, we failed. 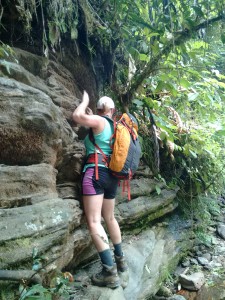 With all of that being said, I’m still going to blame the system, lame as that may sound.  It is my opinion that we never had a chance.  Instead of completing the hike in six-days–which is what we had packed for–we walked to The Lost City and back in 4.2 days and thoroughly got our asses handed to us by fit Australians, young Americans, stinky Germans and a French smoker.  Yes, the only thing that may have been hurt worse than my feet was my pride. 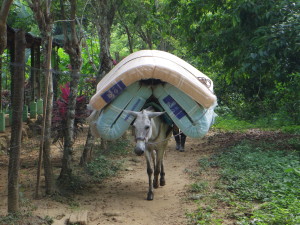 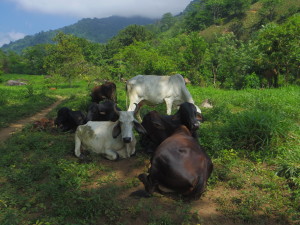 To add insult to injury, our guide was cavorting with the cook (I don’t know where they found the energy to sneak off to the river) and was therefore sporadically in and out of the picture.  Often in his absence (and for most of the first two days), his twelve-year-old son led the group and I kid you not, there were times when I literally had to jog to keep up.  My hips were killing me, my swollen ankles were unrecognizable and my seeping blisters were bleeding.  Hell no!!! 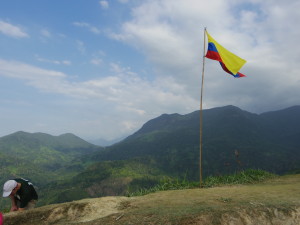 This is probably a good time for me to say the following to put potential trekkers minds at ease.  Although Ryan had done a lot of research and we had signed on with one of the most reputable tour companies, we are pretty sure that our strange experience was not the norm.  There were other groups with different tour companies that signed up for five and six-days who actually got more of the kind of experience that we had been hoping for.  But c’est la vie. 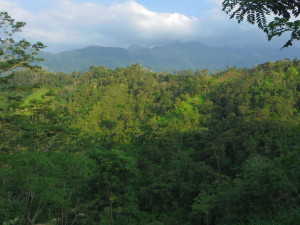 Here is the itinerary we followed:

Entire group (comprised of 4, 5, and 6 day participants) was hauled from Santa Marta and reached the trail-head for lunch.  We left after lunch for a solid afternoon of primarily up-hill hiking (about a 4-hour day).  Reached Camp 1.

Note: Ryan and I got left behind somewhere in hour 2.  In all that time, I’m pretty sure the group took two breaks.  As this number of breaks was in no way sufficient for us (especially me), we declared our position at the very back of the group without fail and usually trailed about thirty minutes behind everyone else. 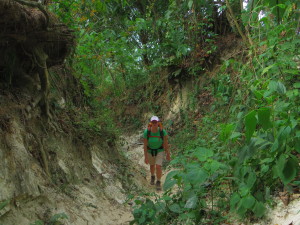 The longest day, around eight-hours of hiking.  Camp 2 was located about an hour from The Lost City.

Walked to and explored The Lost City as a group, returned to Camp 2 for lunch, began return trip home. Stayed in Camp 3 (located between Camps 1 and 2).

Note: This was about the time I began to notice that the same sauce (while yummy) was used in every dish except the fried fish.  By no means was this a big deal, but was something worth mentioning. 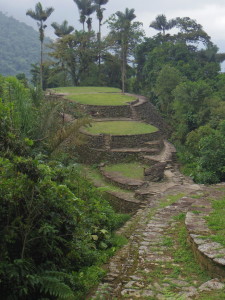 Left Camp 3 and reached Camp 1 around 9 am for a snack.  This was what I consider our 0.2 day because from here, our group finally split.  While five and six-day hikers (Ryan and I) stayed in Camp 1 all day long, the rest of the group continued on to the trail-head, had a latish-lunch and was hauled back to Santa Marta.  This was a very long morning for four-day hikers as this last leg is somewhat of a bear.  Our guide took the rest of the group to the trail-head and then came back for us later that day.  Sort of embarrassing but I was not going to make it.

Note: Ryan and I spent the remainder of the day playing cards and swimming in the nearby river pools where we were joined by a mysterious yellow and red snake.  No more swimming for me. 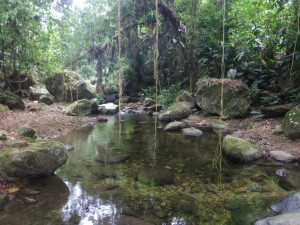 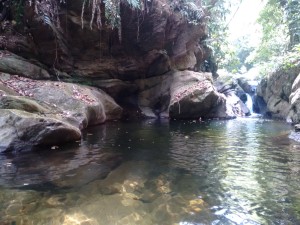 Day 5: ONLY Ryan and myself

Returned to the trail-head ahead of guide and cook (we almost got lost) and had lunch.  (Six-day hikers would simply have stayed in Camp 1 another day but I was through with my jungle experience and so we opted for the five-days instead and came out a day early.)

To this crazy and nonsensical schedule I say this: What the hell!  I wanted a nice luxurious pace and a little time to take in some scenery as we merrily trekked along.  But nooooo.  So I gritted my teeth and scrambled along behind as fast as my swollen ankles would allow.  Ryan was a very good sport. 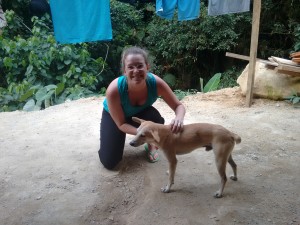 But enough Debbie Downer.  There were also some very positive aspects of the experience worth mentioning.  Besides the scenery–beautiful at a glimpse–I quite enjoyed the other people in our group.  Although they marched us into the ground by day, (they miraculously managed to maintain that furious pace whenever Trail Boss was MIA and Junior had given up the lead) they played cards with me by night.  Anyone who knows me at all knows my genuine love for card games.  This was a definite plus. 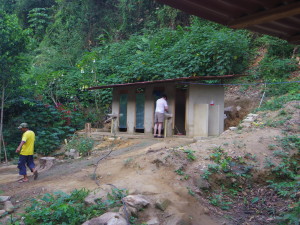 In addition, I have to say kudos on the facilities which were far superior to the ones available for our Inca Trail trek to Machu Picchu.  There was a sublime moment every time I finally drug myself into another camp-sight to spot the showers waiting for me off in the distance right next to the neat row of real toilets.  Who knew that a cold shower could feel so nice or that a cold, seatless ceramic toilet could be worth celebrating? 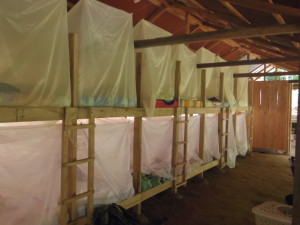 Without a doubt, my favorite aspect was the sleeping arrangements.  Although we were in the middle of the jungle, for those four nights we got to enjoy real bunk-beds, made up with a sheet and a blanket that could serve as a pillow.  Each top and bottom unit was covered by a mosquito net.  The mattresses were so soft I sagged right into the middle and dreamed I wasn’t lost in the jungle (on more than one occasion–and with no guide in sight–I actually wondered if I was).  I slept so soundly I forgot about swimming with snakes, or swollen ankles and feet covered in blisters.  I slept like I was dead.  I slept so hard, yet every morning I was almost too tired to wake up and start it all over again.  Almost.