I was thrilled to hear that my cousin Leanne would be coming for a visit in mid September.  And where better to entertain her than Buenos Aires.  I think Ryan was fairly horrified by the long detailed itinerary I sent her way listing my suggestions for activities, but I wanted to accomplish two things.  Not only did I want to help Leanna plan for the visit but I wanted to ensure that our young guest did not get bored in our company.  I am happy to announce that we succeeded.  We had a busy but enjoyable visit and saw as much of Buenos Aires as time could afford. 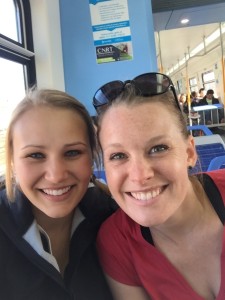 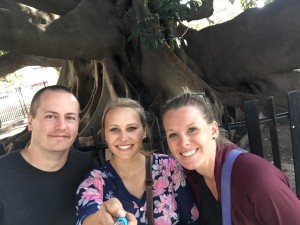 On Sundays the streets in the San Telmo area are lined with booths selling fabulous Argentinian treats.  Leanna found several gifts for her friends and family, as well as some souvenirs to keep for herself.  But she wasn’t the only one.  I too picked up a few treasures along the way. 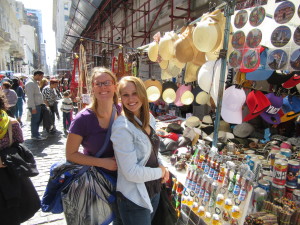 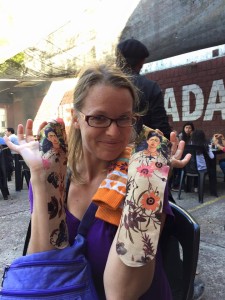 The first thing I learned about my cousin is that she doesn’t care for breakfast sausage.  However, this didn’t deter Leanna from trying the local choripan which is like a sausage sandwich.  To my delight, she liked this type of sausage much more.  Better yet, she was a big fan of empanadas which accompanied a lot of our meals. 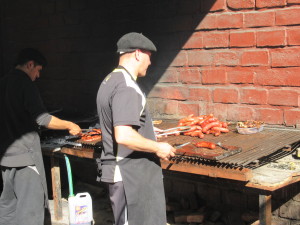 Choripan on the grill

Being in Argentina, we tried to get her as much steak as she wanted.  At Parilla Pena, she tried a steak that she reported was the best she’d ever had.  At Las Cabras, we shared her favorite wine and an enormous meat plate.  Leanna was interested in trying anything and everything and she did too, cautiously chewing the intestine and slicing off a thin sample of yet another type of sausage and something I’m guessing was kidney.  She only faltered at the blood sausage but who could blame her?  The purple color is certainly off-putting and no matter how pleasant the flavor, the mushy texture gets me every time. 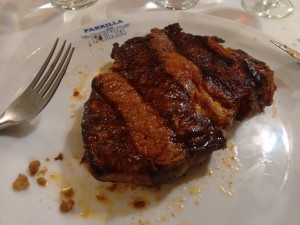 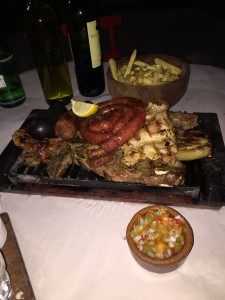 Not only did we get to try a new bottle of wine with every dinner but we participated in a fancy wine tasting at Anuva.  During this tasting, we were able to try five different Argentinian wines paired with five typical Argentinian appetizers.  We tasted and jotted down notes and had a great time–but not too great, concerned parentals. 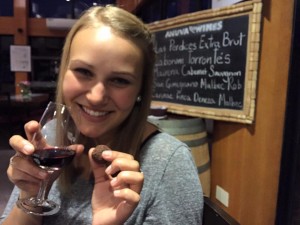 Both Leanna and I liked the Carinae Finca Deneza Malbec paired with the chocolate. 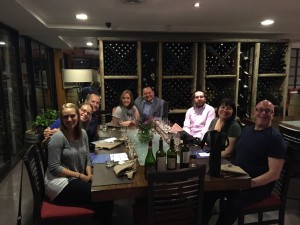 We enjoyed two free city walking tours while Leanna was with us.  The guide on the first tour was funny and a little brusk.   We clipped along behind him at a brisk pace for hours, snapping photos of the beautiful French-influenced architecture whenever we got the opportunity.  He explained that Argentinians are basically Spanish-speaking Italians who wish they were French.  Buenos Aires is apparently a city of immigrants (mainly Italian) who gesture a lot with their hands and place stresses in strange places (like Italians would).  For this reason, many fluent Spanish-speakers have difficulty understanding the Argentinian dialect.  Although Ryan and I have been traveling all year in different Spanish-speaking countries, we couldn’t get used to the -ll having a -sh pronunciation.  Leanna, who had taken three years of Spanish in high school didn’t fare much better. 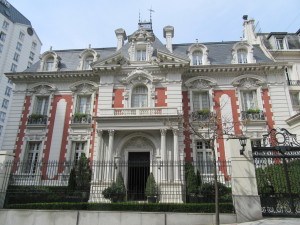 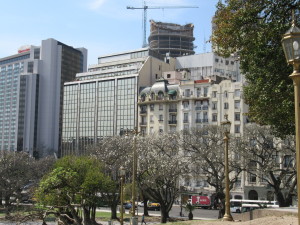 Another interesting thing about the architecture in Buenos Aires is the contrast.  The guide on our second free walking tour (which covered a different part of the city) emphasized how much of the old European architecture is juxtaposed with modern construction.  Everywhere you look in Buenos Aires, you can see this juxtaposition.  After a while, we began to count (to ourselves) how many times he used the word juxtaposition.  It may have been fun for us, but he was was absolutely right.  Because nothing matches in Buenos Aires, everything does.  It was an interesting perspective and much appreciated, regardless of our teasing. 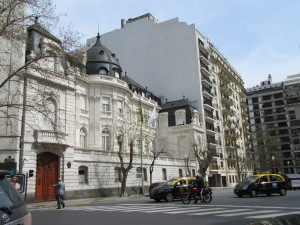 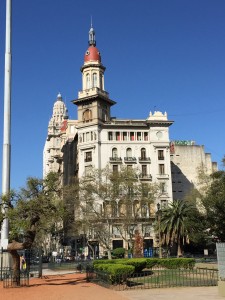 Of course we had to go and see where Evita is buried and I took up the hobby of taking pictures of Leanna in front of beautiful doors.  My preference differed from Ryan and Leanna’s in that I like to take both full and close up shots.  To me, it was not only important to help her remember the things she saw, but I also wanted her to remember how she felt when she saw them.  Luckily she humored me, posing for each photo series and by the end of her visit, I think she had more pictures of her face than she could stand.  But I must argue that it’s such a pretty face and I wanted to capture the delight that always seemed to be shining in her eyes. 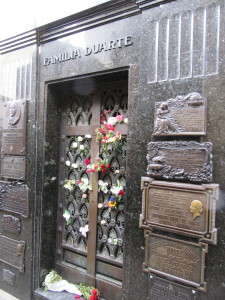 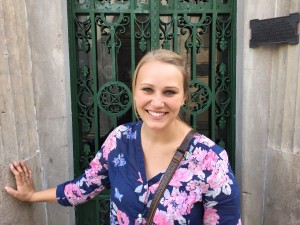 Leanna loved this colorful neighborhood and all the art it offered.  She purchased a small painting and I later caught her snuggling it in bed.  Although she will adamantly deny this claim, I have documentation.  I was happy we found her the perfect picture to add to her home collection. 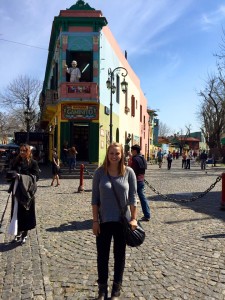 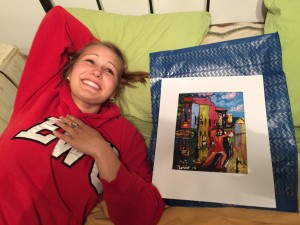 I told you so!

For me, the highlight of our outing to Puerto Madero was the authentic ship we were able to board and explore, although the buildings around the harbor were very nice and modern.  This appeared to be one of the more expensive neighborhoods in the city as Ryan and I found when we looked at the menus of some of the restaurants located here. 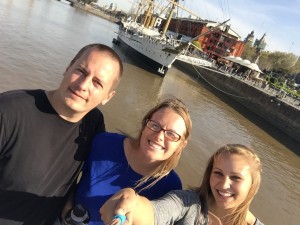 I promise the ship is a lot bigger up close. 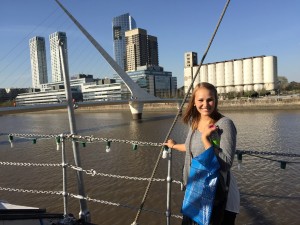 The wind is in her hair and she’s ready for adventure!

Besides the occasion shows we caught in the street, we attended a Friday-night milonga and watched local people dance the tango.  No matter the age or body-type or however casually dressed, the people demonstrated the true beauty of this dance as well as the social aspects it provides for residents of Buenos Aires.  Everyone was out dancing with everyone else and they were all having a great time.  So neat. 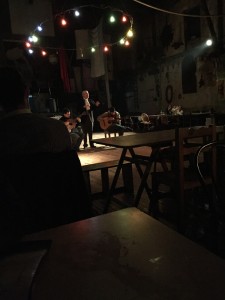 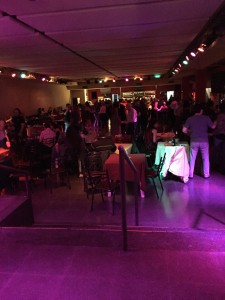 With hot drinks in our cold hands, we walked the length of tourist-trap Florida Street and back, counting how many times we were solicited to exchange our US currency on the black market.  It seemed to be a slow night.  The way up showed only twenty-five attempts.  We were expecting more.

Our Bike-It Tour took us on a train and out of the bustling city.  We rode down cobblestone streets and took in some beautiful scenery along the Rio de la Plata.  We even got to walk through a beautiful nature reserve and see a few turtles.  We were the only three people on the tour so it felt very private.  Although there were several close calls, I never actually wrecked my bike.  We were all very sore the next day and ready for more walking. 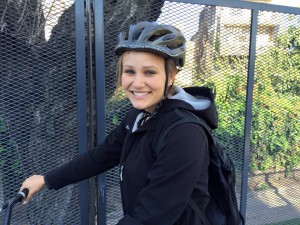 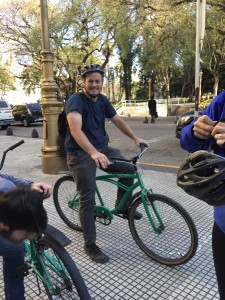 It was unfortunate that we were only a few weeks early to catch the rose gardens in full bloom.  There were a few early bloomers and they were beautiful.  Nevertheless, the gardens were perfectly maintained and manicured and some of the most beautiful I have ever seen.  The flowers in the Japanese Gardens were in bloom, although we’d missed the blossom trees.  It was like being transported to another time and place. 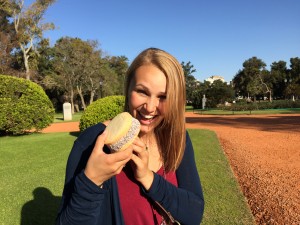 Leanna with her favorite dessert, alfajore, in Paseo El Rosedal. 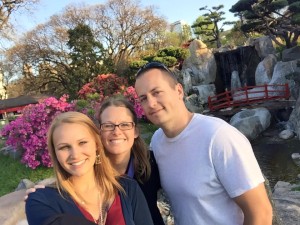 Leanna and I perused two art museums during her stay.  We found a Frida in the MALBA.  Otherwise it was pretty small and had a lot of modern work we weren’t as pleased with.  El Museo Nacional de Bellas Artes was huge and had everything from Monet to Pollock.  I took pictures of anything and everything I though my Mom might enjoy (without the flash) and was impressed by how much Leanna knew about art. 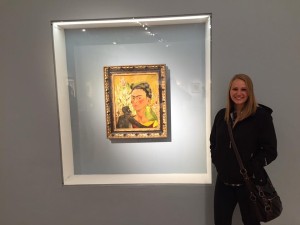 Leanna with her Frida

One of my and Leanna’s favorite adventures may very well have been our visit to the zoo.  What made the Buenos Aires Zoo so special were all the critters sniffing our feet and chasing each other playfully across the lawns and around the buildings.  They were everywhere, swimming the canals and making off with the elephant’s food.  They looked so happy and actually enjoyed seeing people, as we were allowed to purchase special food to feed them.  And just when we thought things couldn’t get any better, low and behold, there were rabbits!  Leanna had been missing her rabbit Darwin and anyone who knows me well knows I have a great love for rabbits.  So there it was, perfect day, perfect visit. 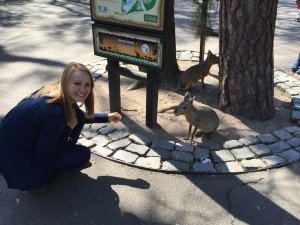 Mara are the fourth largest rodents in the world. 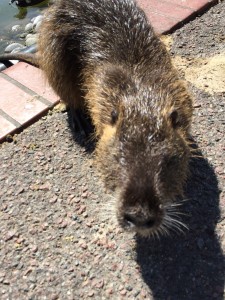 These Coypu (also known as Nutria) were everywhere and were my personal favorites.

Thank you Miss Leanna for coming so far to spend time with us.  It was such a treat!  I will cherish the memories always and look forward to our next adventure together, whenever and wherever that may be. 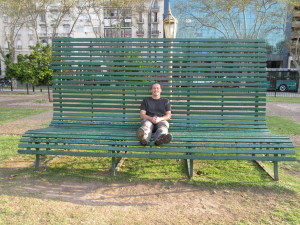 Ryan on a big bench 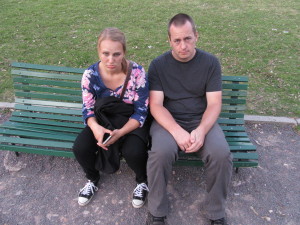 7 Responses to Buenos Aires, Argentina–Entertain Us