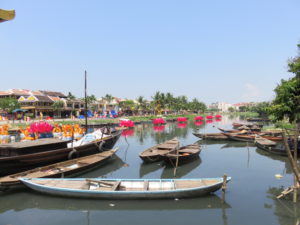 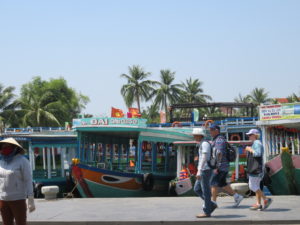 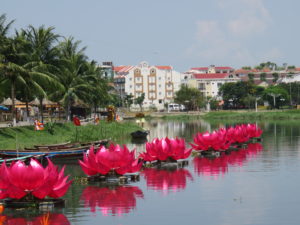 Hội An is a forty-five minute scooter ride from our apartment in Danang.  The road is somewhat busy but the breeze is pleasant.  The road is along the coast.  When the ocean is not blocked by a big resort or construction project, the views can be very nice. Hội An is a port city with a population of approximately 120,000 people.  It is a UNESCO World Heritage Site known for its well-preserved Vietnamese, French, Chinese, and Japanese architecture.  I’ve been to Hội An twice, although the experiences were somewhat different. 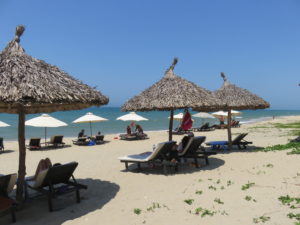 An Bang Beach, Hội An 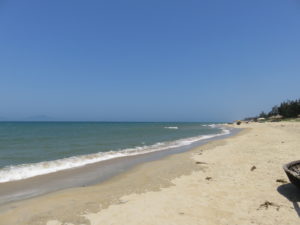 An Bang Beach, Hội An

The first time we visited was during the heat of the day.  Before we’d even reached the city we had a friendly young couple zoom up next to us and casually visit with us all the way to the city center.  It was strange having an ongoing discussion with two strangers from the back of a moving scooter, but it seemed completely normal to them.  They were very interested in our plans and I kept waiting for them to pitch us something, but they only seemed interested in talking to us. 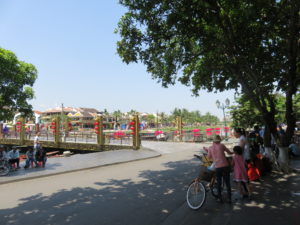 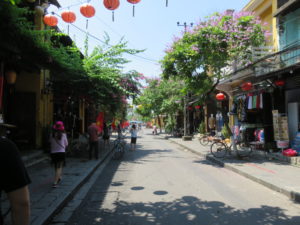 They showed us where to park which was helpful as this can often be confusing in a new place.  Just when I was beginning to feel guilty for being suspicious–I was even considering inviting them to join us for lunch–the woman pulled a business card out of her pocket.  She told me that her family owned a tailor shop and I should come and look at it.  It was right on the way.  It wouldn’t take long.  The quality of their clothing was excellent and the prices were very reasonable.  I could just look at what they had.  There would be no pressure to buy, etc.  By then we’d already been having a casual conversation for the past fifteen to twenty minutes and it felt awkward to not follow her to her family’s store, so we did. 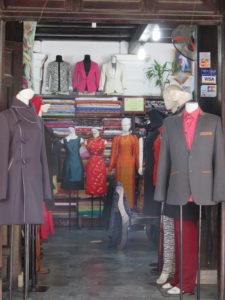 Hội An is well know for it’s tailor-made clothing scene.  If you’re in the market for a nice suit or dress or coat custom made to fit your figure, Hội An is the place to be.  If you’re more interested in taking in the scenes and trying some of the food, then walking past the endless tailor shops can feel more like running a gauntlet.  At least that’s how it felt for me.  Everywhere we went there were friendly faces beckoning us to come into their family’s store, or sometimes to follow them there.  “What’s your name?  Where are you from?  What do you think of our city?”  If you chose to answer any of these questions then you’re already having a nice conversation and it feels rude to cut it short or refuse them a few more minutes of your time when the subject of commerce rolls around.  (It always did, by the way.)  The high-pressure sales situation was so distracting that it was hard for me to even notice the city’s interesting mix of french colonial, Chinese, Japanese, and Vietnamese architecture. 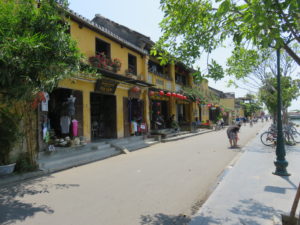 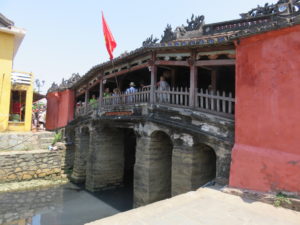 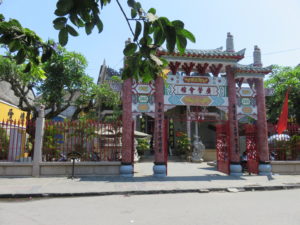 We ended up doing a rushed once-over of the city center (which didn’t take long).  We decided not to purchase a ticket to enter Old Town and see the handful of buildings that aren’t shops.  Instead, we grabbed a banh mi from one of the eateries previously visited by Anthony Bourdain (Banh Mi Phuong) and jumped right back on that scooter.  “Get me out of here!” I told Ryan, and he did.  Promptly. 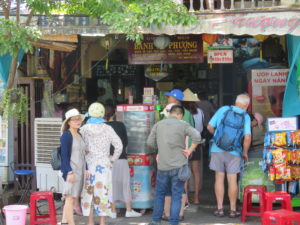 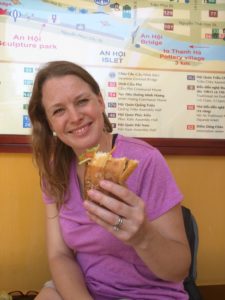 I wasn’t in a big hurry to go back after that, but we did a couple of months later.  This time we visited Hội An in the evening and I much preferred this city at night, all lit up with paper lanterns.  It was truly a beautiful sight.  While there were still high-pressure salesmen at work, this time trying to talk us into taking a romantic boat ride down the canal, at least I was more in the market for this service than the tailor-made clothing scene.  We let them talk us into taking a short boat ride.  We paid the elevated prices that were asked and for the most part, we enjoyed ourselves.  In conclusion, Hội An was not my favorite destination in Vietnam, but it was still worth the visit. 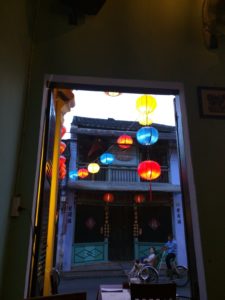 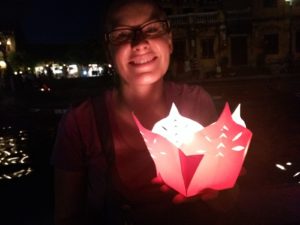 6 Responses to Hội An, Vietnam–Paper Lanterns