Ryan and I have been living in Ho Chi Minh City for a month now.  It’s definitely taken some getting used to but that doesn’t mean that I haven’t noticed some pretty impressive things happening here in this bustling and mysterious place.  The following top ten list shows the highlights from my time in Ho Chi Minh City thus far:

My last post was all about Tet, so I’ll try to not be too redundant.  Let me just say that seeing all the beautiful flowers and impressive decorations has been fantastic.  The city was decorated when we arrived and many of the decorations are still standing.  They look great, especially at night when they are lit up.  Everywhere you go they are a little different.  Decorating is something that the Saigonese seem to take very seriously and I greatly appreciate it. 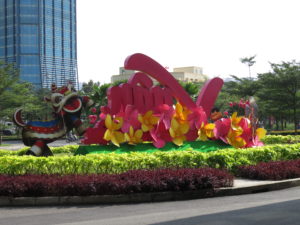 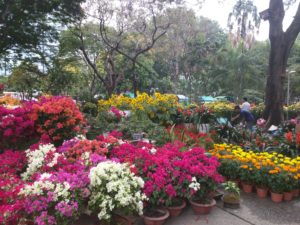 We had only been in the city for a few days when Ryan took me on a surprise adventure to the cinema at CGV Liberty Citypoint.  We purchased gold member seats (sort of by accident), and enjoyed reclining chairs, blankets, and tea in a theater that could accommodate only ten or so viewers.  This was the coolest movie experience I’ve ever had!  Thank you Ryan for the awesome treat!  Also, thank you language barrier, LOL. 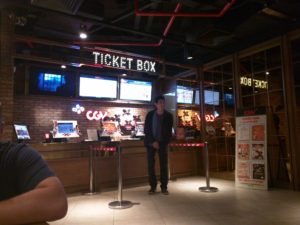 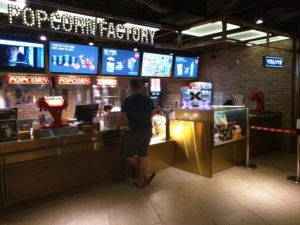 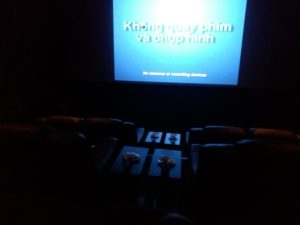 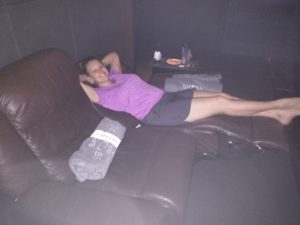 So far this has been my favorite restaurant.  As the name suggests, Bun Cha 145 introduced me to bun cha which is a dish of grilled fatty pork served with white rice noodles (vermicelli) in a tasty sauce.  In addition, I had the best dessert that I’ve had in a long time–fruit-filled deep fried spring rolls.  They were amazing!  What a great meal and one that I hope to repeat as often as possible.  They’ve been closed for a couple of weeks for Tet, but as soon as they reopen, we’ll be back! 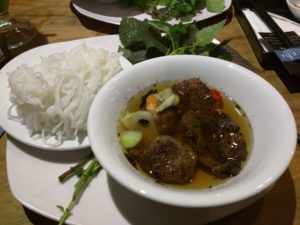 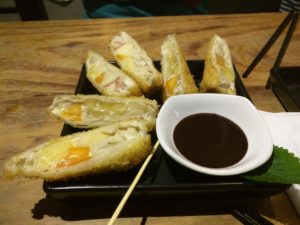 The magnificent Uy Ban Nhan Dan Thanh Pho Ho Chi Mihn (Ho Chi Minh People’s Committee Building) is located at the northern end of Nguyen Hue Boulevard.  This area’s splash of French architecture is my favorite part of District One.  We were able to see it before, during, and after Tet and it’s always a nice place to walk through.  It’s also very near the Notre Dame Cathedral and the Central Post Office. 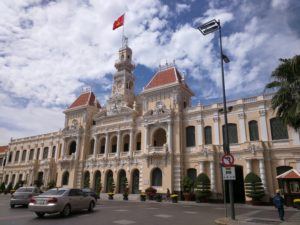 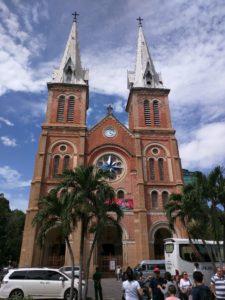 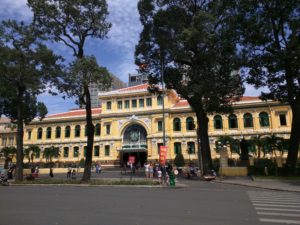 It’s taken me a while to figure out how to order this tea because they have it everywhere and it’s always a little bit different.  There are so many choices about which kind of tea (I like the milk tea versions) and which “bobas” go into it that I never quite know what I’m doing.  Usually, I guess and I point.  This milk tea?  These bobas?  I personally prefer the black ones.  They have subtle flavor and by far the best texture (in my opinion).  Usually I get what I was hoping for, but regardless, it’s always good. 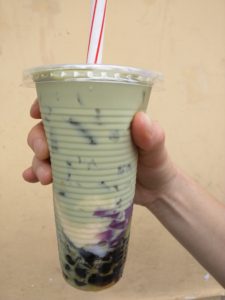 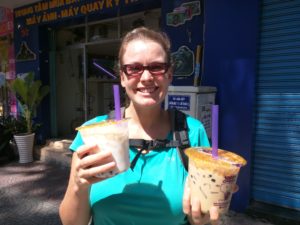 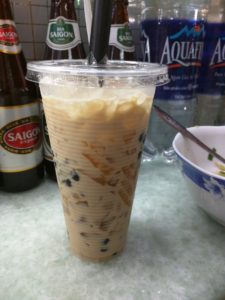 The first few days we were here, it rained every afternoon for an hour or so.  The rain was warm and we walked a good distance without getting soaked.  We’ve had two or three rainy days since, and sometimes it really rains hard, but for the most part the weather has been either overcast or warm and sunny.  It will definitely be interesting to see what happens during “monsoon” season.  My understanding is that it rains for six months! 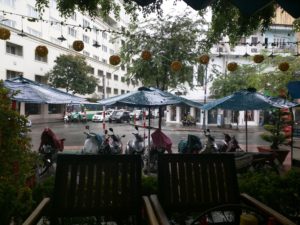 This is my favorite dish.  It generally consists of grilled fatty pork over rice vermicelli (with spring rolls, if I’m lucky).  Lots of fresh greens are added, as well as a fish sauce on the top.  We’ve managed to find it in many locations within walking distance and that means that I’m a happy girl.  My favorite versions have mint, but that’s not as common.  I must add that it’s entirely possible that I’m ordering the wrong thing and that the ones that come with mint are actually a completely different, yet similar dish with a similar name.  Regardless, the bun thit nuong gets two thumbs up from me. 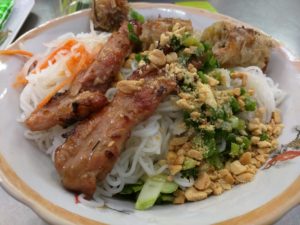 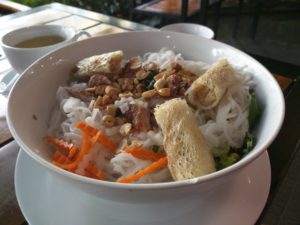 It’s important to not forget the little pleasures in life.  Having these wet hand wipes may be a simple thing, but it feels so stinking good to use them.  They are thick and soft and they make your hands feel so nice and clean.  In addition, they are often the only hand wiping option as I’m finding more and more restaurants that don’t have napkins available.  These usually cost $3,000-$5,000 VND (about $0.20 USD) and are worth every penny! 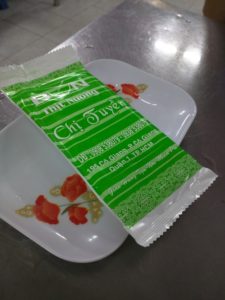 OMG!!!  This fantastic fruit tastes just like bubble gum!  I could eat it until the end of time.  We’re talking morning, noon, and night.  I was first introduced to jackfruit in a beverage.  I didn’t know what it was but it had bits of coconut and what I believed to be mango floating around in it so I was sold.  The mango turned out to be jackfruit instead.  I’ve been keeping an eye out for it ever since.  We found a lady that sells it just around the corner and I get a pack when I want to treat myself to something extra special.  It usually cost $25,000 VND (about $1 USD). 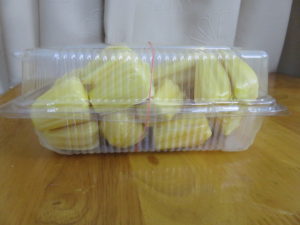 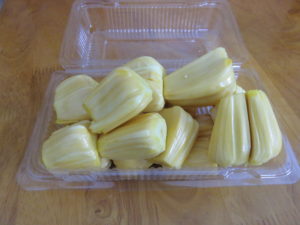 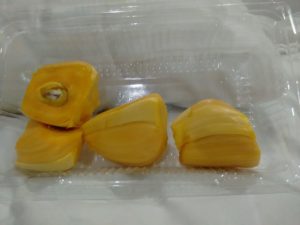 Ryan and I arrived in Ho Chi Minh City during high season.  In early January it’s not too hot and it’s not raining and people often come to spend the remainder of their vacation before going back to their busy lives.  This made apartment hunting a little difficult.  It didn’t help that we were looking for something for two months (and for two people).  This is generally thought of as too long for a short-term rental and too short for a long-term rental.  However, we found one!  It’s a tight fit but the shower is somewhat separate and the AC is awesome!  A maid also comes twice a week and does our laundry.  It’s a pretty nice set-up.