Because Ryan and I are members of the Lake Chapala Society in Ajijic, we get to participate in all of the cool activities that are organized by the LCS.  Last week, I was thrilled to be included in the Guadalajara zoo excursion.  This was a truly sweet deal.  All we had to do was pay our discounted price (members only) and show up at the pick-up location.  From there, we boarded a comfortable bus and rode a little over an hour to get to Guadalajara. Everything else was taken care of. 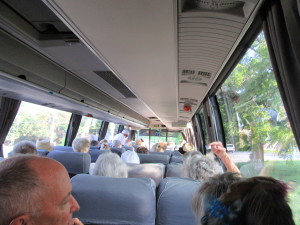 View from the back of the bus

Zoo prices in pesos. Our tickets were pretty much all-inclusive for 320 pesos per person. That’s a little less than $19 (including transportation) at the current exchange rate.

The Guadalajara Zoo easily made it into my top three zoo experiences ever.  Not only was the entire trip a cake-walk for us–with everything organized ahead of time–but in addition to the expected lions, tigers, and bears this zoo had the most incredible monkey domain imaginable.  In this zoo of zoos, we were able to enter the monkey enclosure and allow them to climb all over us.  It was a once-in-a-lifetime experience and I think I stayed in there for at least forty minutes.

I was so excited I cut Ryan’s head off!

Who knew that monkeys have a thing for babies in strollers?  They went crazy every time another unsuspecting family entered the monkey pen.  They literally ambushed the strollers and began crawling all over them.  Of course what they really wanted was food and they made a big deal searching the nooks and crannies of the strollers for anything of interest.  When they were not satisfied–because food was not allowed in the enclosure–they even gave the babies a once-over until the zoo attendant chased them off with a spray bottle. 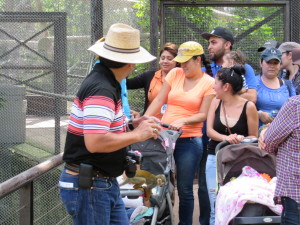 Another high point of the Guadalajara Zoo was the safari.  This was exactly what it sounds like.  Ryan and I were able to board a long jeep-like bus and were driven out into an open animal sanctuary were zebra and ostrich and gazelle all grazed the green open landscape in utter bliss.  The giraffe herd sauntered up to us and ate carrots from our eagerly outstretched hands.  Who knew those big lips could be so gentle?  It was so, so cool. 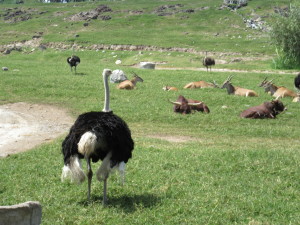 Home on the range. 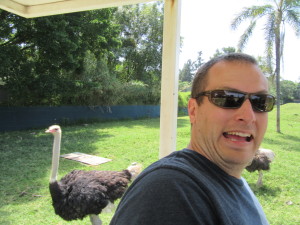 Ryan is The Terror 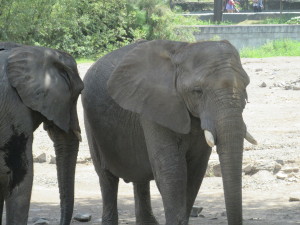 Elephants on safari! For once, they seemed to have enough space. 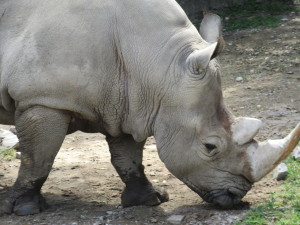 Hot in these rhinos 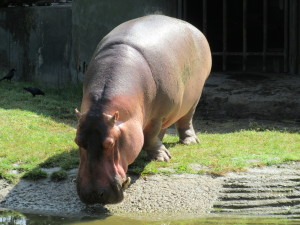 My previous zoo experiences have always found hippos to be totally submerged, which he did shortly after. It was neat to see him out of the water.

And yes, they did have lions and tigers and bears and they all looked well-fed and happy as they slept in the sun.  Every so often the train would go by, carrying many of the other members of the LCS to the other end of the expansive zoo.  Overhead, the chair-lift carried more happy zoo patrons who peered down in delight.  In the distance, the Howler Monkeys would get a little carried away but the rest of the animals napped on in peace, undisturbed.  And all were happy, especially me!

We were pretty much right inside with these guys too. There was only a little rail to keep up from walking right up to them. 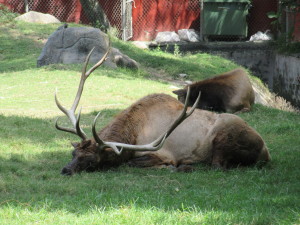 I promise, he’s not dead. 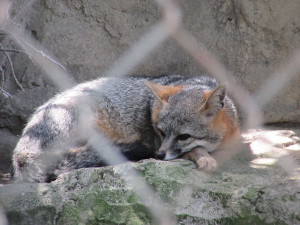 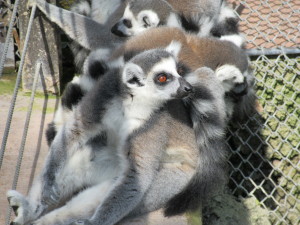 This pile of lemurs was curled up right beside the monkey door, close enough to touch, with no barrier. Luckily I restrained myself.

6 Responses to Guadalajara, Mexico–Oh My!