When Ryan asked me where I most wanted to go in South America, the answer was easy.  I chose to visit Argentina because of the Tango.  I was first introduced to this seductive dance in college and somehow continued to study the Argentine Tango for the next seven years, in Idaho, Washington, and Montana (of all places).  That’s a good amount of time to spend kindling a dream and when I actually found myself sitting at a table with my husband and our friend Justin in the back room of a restaurant in Mendoza, Argentina watching some beautiful Tango, I was not disappointed.  I was THRILLED.

I quickly learned many things that night.  The first was that the show we were watching was not a show at all.  We had unknowingly wandered into a Milonga, which is like a social dance event.  We hid in our casual wear behind our table on the corner of the dance floor as beautifully dressed women at the tables around us changed into strappy heels.  Sharp dressed men crossed the room to kiss the cheeks of both men and women they were previously acquainted with.  Then, entire tables cleared all around us, venturing out onto the dance floor to stalk gracefully to the slow and sensual music.

The second thing I learned was that I had grossly misjudged the power of the romper back in Chile.  The romper is a shorts version of the notorious jumpsuit I mentioned in a previous post (Lost in the Big City).  One of the major problems I had with the jumpsuits in Chile was that the women wearing them were not often (if ever) lean mean machines.  The woman wearing the romper at the Milonga however, was completely captivating.  She had legs for days and a smart and sophisticated haircut.  Every time she was steered near our table, I found myself stealing glances to see just how far up her shorts I could actually see.  God love the romper. 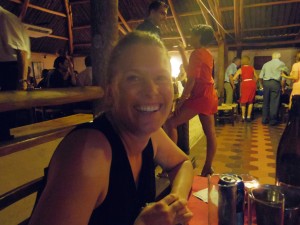 I  became deeply bothered by my t-shirt and jeans which up until then, I had been hiding behind our table.  Suddenly, like Cinderella I was off, keeping to the edge of the dance floor and the shadows until I had escaped the building.  My tennis shoes pounded the pavement until, five minutes later, I reached our apartment and was saved by the elevator.  Within ten minutes I was back on the streets, holding up my long black skirt as my sandals slapped the pavement.  The woman minding the door of the restaurant smiled at me knowingly as I reentered the Milonga in a new state of grace and refinement.  Ryan looked bewildered when I rejoined our table and slipped on strappy black heels of my own.  And then, with the kind courtesy of two older gentlemen who seemed to sense my yearning desire to participate, I danced the Argentine Tango for real.  To my relief, although it had been four years since I’d last had a go at the dance, my feet never stopped moving.  And I couldn’t stop smiling. 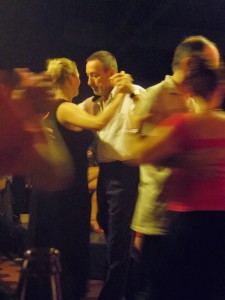