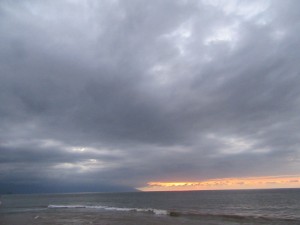 Irony is a funny thing.  Ryan and I chose to visit Puerto Vallarta over Cancún because it’s Mexico’s hurricane season and historically, Puerto Vallarta has less risk of being hit.  That’s why, when Puerto Vallarta’s “tropical storm” turned into a full-blown hurricane alert, we were both very surprised.  And yes, we were a little worried. 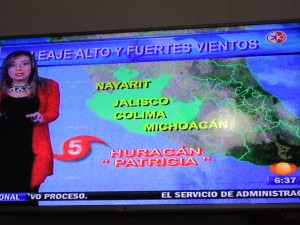 The weather on Thursday, October 22nd was nothing special or unusual.  A little gray.  A little gusty.  Ryan and I went out for drinks and sat enjoying the slight breeze on the second-story balcony of the Cheeky Monkey.  Below, people walked along the Malecon like usual.  We each had a margarita and shared a small taco pizza. 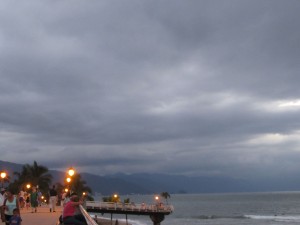 A storm’s a-brewing in Puerto Vallarta

It wasn’t until around midnight that Ryan interrupted my movie.  He stood in the doorway of our current bedroom looking a little nervous.  “So,” he said, “You remember how we didn’t go to Cancún because it’s hurricane season?” he began.  I was completely bewildered to hear that local authorities were recommending evacuation, but relieved to find that Ryan was so on top of things that he’d already gotten us bus tickets on the first available bus back to Guadalajara.  And then we both showered and packed our bags. 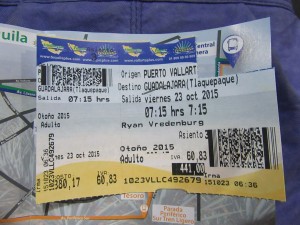 Our lucky tickets…thank you Ryan!

It was still dark outside when we hailed a taxi on Friday morning (October 23rd).  It appeared the city was still asleep as we left it behind.  On the way to the bus station, the driver spoke about the hurricane, saying that we were wise to leave and that a lot of people were choosing to stay, for one reason or another.  He also seemed convinced that the gay community was to blame for the hurricane bearing down on us (what?!! I don’t think so…). 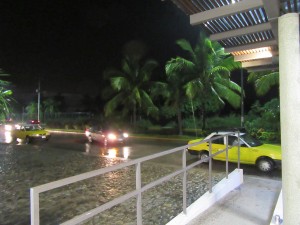 Our taxi just leaving us at the bus station

The bus station was no more packed or crowded than usual.  Everything was operating on schedule and the bus we got on wasn’t even entirely full.  I slept the next six hours or so very comfortably as light rain pattered against the bus windows.  The trip was only slightly delayed.  (We would hear reports of the six-hour trip taking later buses up to ten hours.)  We reached Guadalajara without incident. 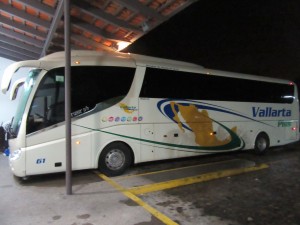 Our knight in shining armor…thank you Vallarta Plus!

That night we stayed at a very nice hotel and sat planted in front of the TV.  For the first time in over a year, we had CNN and watched in mixed awe and horror as information about Hurricane Patricia, “the worst hurricane ever recorded in history” was reported live from the very city we had just fled from.  We recognized the locations captured in the live footage and kept our fingers crossed while I prayed for those who had not been able to evacuate as we had. 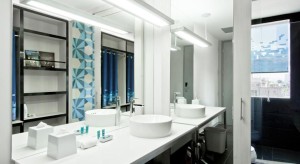 Ryan woke up every two hours all night long and by 7:30 the next morning (Saturday, October 24th) we were assured that Patricia had not completely devastated Puerto Vallarta as she had been expected to do.  The storm had moved beyond us and had left very little damage in her wake.  It was truly a miracle of sorts. 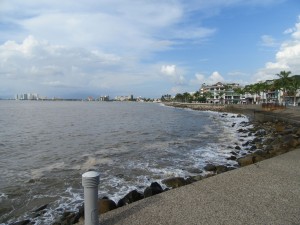 The city, still standing, the day after evacuation

By 10:00 am that same morning we were back on the bus and returning to Puerto Vallarta to pick up our guest from the airport–only one day after we had evacuated.  Eric’s flight arrived right on time without any delays and Puerto Vallarta was completely functional once again, although it was a little less crowded for the next few days and the waters remained murky for most of the week. 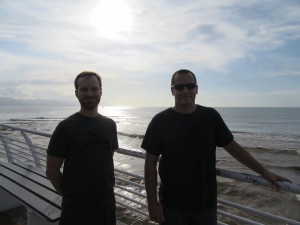 Eric and Ryan, standing on the Malecon the day after evacuation

It was as if nothing had ever happened.  While many locals claim that Puerto Vallarta was never in any real danger because the surrounding mountains protect the city from this sort of thing, I remain skeptical.  Most importantly I remain grateful.  Patricia, the strongest hurricane in history, chose to be merciful. 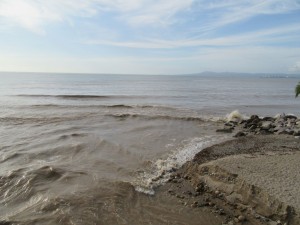 The murky waters were some of the only evidence of the hurricane that had hit the previous day.

One Response to Puerto Vallarta, Mexico–Patricia the Merciful