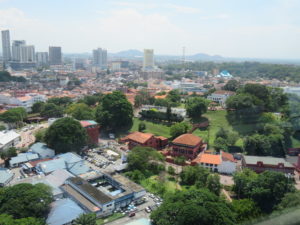 Sometimes it’s hard to believe that Ryan and I have spent most of our marriage living abroad.  The desire to continue to see more places and do more things (along with complicated visa restrictions) has led us to adopt a nomadic lifestyle which for the most part we truly enjoy, even if it means moving to a new country every two to three months.  It’s therefore not too surprising that we always seem to be in transit during our anniversary.  This year was no exception.  When July 11th rolled around, we found ourselves needing to do a short visa run, so Ryan took me to Melaka (also spelled Malacca).  Located on the peninsular west coast of Malaysia, Melaka is a city with a population of nearly 900,000 people.  It was named a UNESCO World Heritage Site in 2008 and many areas have a colonial feel, evident by some of the Portuguese and Dutch architecture.  This was especially noticeable in the Red (or Dutch) Square which was one of my favorite parts of the city. 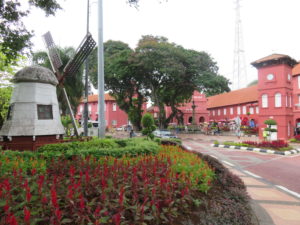 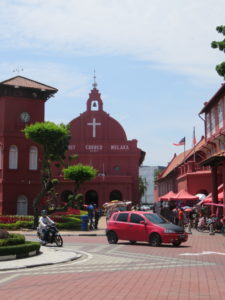 We stayed near the infamous Jonker Walk which is considered the Chinatown street of the city.  Every weekend there is a night market here offering a variety of interesting food, such as durian cendol and fried carrot cake.  While cendol is a sweet iced dessert–similar to shaved ice, albeit with some rather unusual toppings–we quickly discovered that fried carrot cake is nothing like its name suggests.  I was expecting a truly delicious dessert and instead found myself puzzling over the surprising texture and odd mixture of flavors.  Even after eating it, I really didn’t have a clue what it was made of.  Only later did we discover that “fried carrot cake” consists of stir fried cubes of radish cake.  It was interesting and worth trying, but not something I’d likely order again. 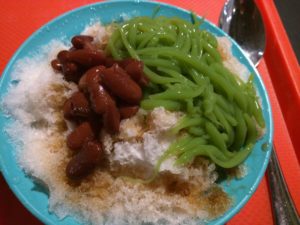 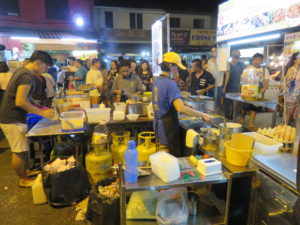 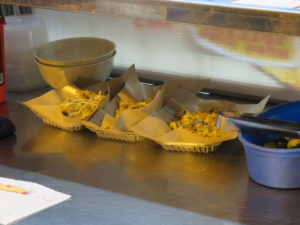 From our conveniently located accommodations, many of Melaka’s main sights were easily accessible by foot and we made it a point to walk to every attraction we visited.  These included the nearby Red (or Dutch) Square, St. Paul’s Church, and the Cheng Hoon Teng Temple, which is apparently the oldest functioning temple in Malaysia.  We also enjoyed a river cruise along the Malacca River and took in the view of the city from the Taming Sari Tower.  It was like going up in Seattle’s Space Needle except that it was constantly turning as it made its way up to the highest point and then back down to the ground again. 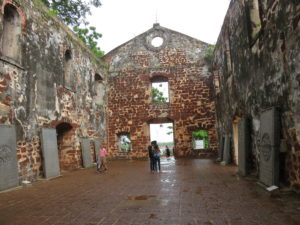 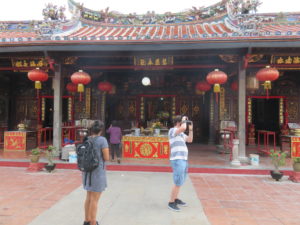 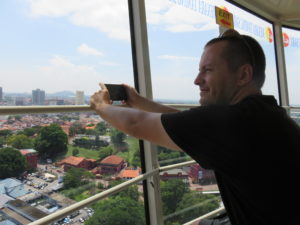 Ryan, taking in the view

Malaysia is a wonderfully diverse country with many ethnic groups, the three most predominant groups being Malay/Bumiputera, Chinese, and Indian.  As can be expected, the food scene reflects this unique combination of cultures.  While were were in Melaka, I had some of the best Indian food I’ve ever had.  One of my best meals consisted of tandoori chicken, butter naan, and a mango lassi from Restoran Pak Putra.  This restaurant appeared to be a hotspot for both locals and tourists.  It was so busy they set up additional seating in-between parked cars in front of the restaurant and the food was absolutely delicious!  We went there twice while we were in Melaka and we were happy with both visits. 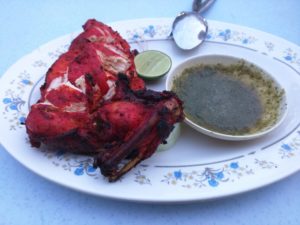 I was also a big fan of the coconut shakes.  Although the Klebang Original Coconut Shake establishment was one of the few places we went to that wasn’t easily accessibly by foot, Ryan had read that they would be worth going somewhat out of our way to try, so we hired a taxi to drive us.  We were not disappointed once we got there.  I don’t know what made these shakes so good, but they were truly amazing!  Not only did we consume 2 shakes each, but we returned for a second round a few days later. 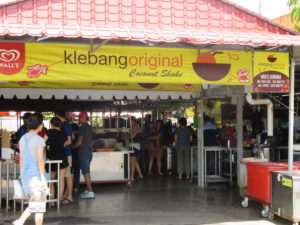 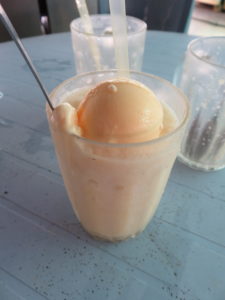 It may not look like much, but it was scrumptious!

Another exception to our foot explorations while we were in Melaka was the day we visited the Melaka Zoo via taxi, although we did a good deal of walking once we got there.  There were plenty of animals to see and they appeared to be well taken care of.  I got an unusually good look at some of the more exotic animals, including some of the big cats and the Bornean Gibbon, which looked like Sasquatch as it was walking towards us.  Unlike Sasquatch, it was surprisingly friendly! 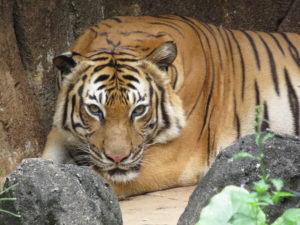 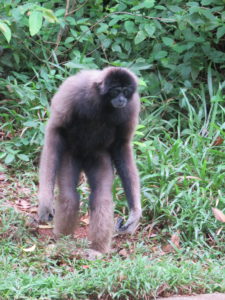 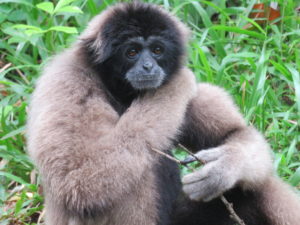 He was a friendly and curious fella.

Oddly, my favorite wildlife sightings were not at the zoo.  Rather, we spotted them frequently as we strolled along the Malacca River, which runs through the city.  At first we thought they were Komodo dragons, but we later discovered they are called Asian water monitors and are among the largest lizards in the world.  They can grow to be more than six feet tall!  A common mature weight can be about forty-three pounds, but some can be over one-hundred ten pounds.  These guys were huge and they were everywhere.  I have to admit that they were one of my very favorite things about Melaka. 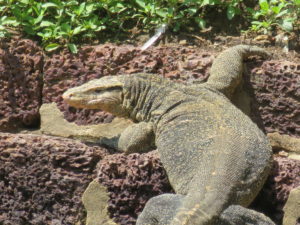 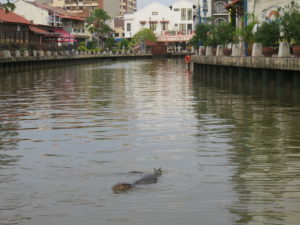 Of course my very favorite thing about Melaka was being there with my husband, celebrating our third anniversary.  We enjoyed a nice dinner at the Sirocco Restaurant located in the nearby Holiday Inn.  We hadn’t made a reservation, but once our waiter learned that we were celebrating our anniversary, he decorated our table and brought out a complimentary dessert.  He even volunteered to take photos throughout dinner.  It was great service, great food, and a wonderful occasion.  Afterwards we took a romantic stroll along the Malacca River Walk.  Thank you so much, Ryan Vredenburg, for 3 exciting years of marriage!  I can’t wait to see where our adventure is going to lead us next. 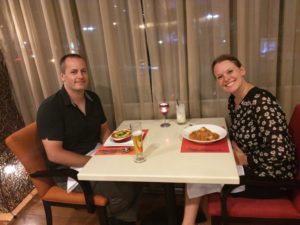 The best table in the house 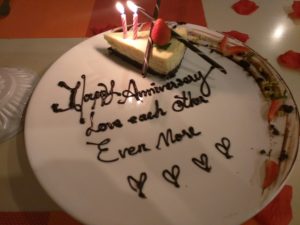 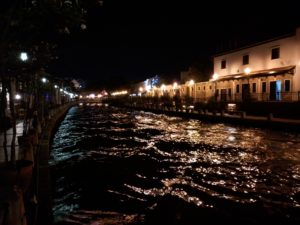