As all travelers know, there are different degrees of jet lag.  But when considering jet lag accompanied by that strong strain of cold contracted from the Portland Children’s Museum, it’s a recipe for disaster.  In the least, a certain amount of discomfort can and should be expected.  Discomfort is exactly what my husband and I experienced when traveling from Portland, Oregon to Cuenca, Ecuador earlier this month.

In our specific case, the trip took a grueling 26 hours with several layovers in places like Houston, Texas—days before the CDC was urged to set up an Ebola quarantine station there (yikes!)—and an overnight stay in Quito, Ecuador.  My husband was the mastermind behind this adventure and the research that he did revealed that an overnighter in Quito was very hard to avoid.  So there I was with my congestion headache, my red scaly nose, and my wet TB cough, making constant runs to the rest room—thank God they didn’t detain me in Houston—sleeping on the cold ceramic floor in Quito, Ecuador swaddled in my stowaway Snuggie.  Ryan was horrified that I’d snuck it into my personal item at the last minute, but I tell you what, that Snuggie was my salvation!

It was a miracle that I slept, but I did.  Ryan sat patiently by watching our mountain of luggage, pale, red-eyed, and sniffing quietly every so often while trying to relieve the pressure which had built up in his ears.  It was one of the only times in our four-year relationship that I’ve seen him take Ibuprofen. 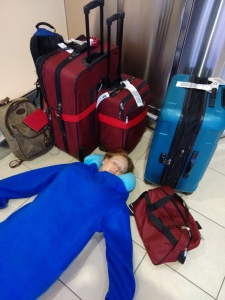 Morning came and once we checked in with the correct kiosk and my 68 pound bag (Killer Case) was again tagged “HEAVY”, we flew the short distance to our final destination, Cuenca, Ecuador.  Ryan, in all of his cleverness, had managed to secure a ride from the man renting us our apartment.  Juan was waiting at the terminal with a sign that had our name on it and I could have cried with relief.

Once at the apartment complex—Ryan was kind enough to carry Killer Case up the three flights of stairs—I realized that for the second time since our travels had begun, eight hours had passed since this little hobbit had eaten.  And BOOM, just like that, I was famished.  We were now in Emergency Quest Mode.  But where does one go to get a bite in a foreign country when one does not speak a word of Spanish?

The answer turned out to be The Loft Garden Café which was about 100 meters from our apartment.  As we entered the little hole in the wall, the traffic noises faded away and behold, a gorgeous indoor garden, lush with yellow, white, and pink flowers as tall as my waist.  The morning air was crisp and fragrant.  For the first time in 26 hours, my spirits lifted. 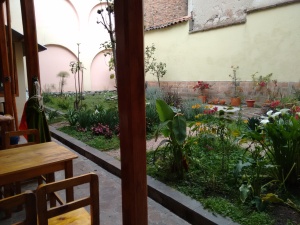 We were greeted by an Ecuadorian woman who spoke English and kindly provided menus written in both English and Spanish.  She returned to take our orders and conversed with us about our visit.  It turned out that Monica (along with her friend Marta) is also the proprietor of the establishment.  All of the food is cooked to order and cost an average of four dollars.  They serve breakfast all day and offer lunch as well.

Monica let us know that her lease would soon expire but invited us to come and visit her new location which would not be too far away.  In addition to offering American-style food in two languages and gorgeous ambiance in a cozy courtyard, The Loft provides a book exchange service and is also the home to an international writing group that meets on Wednesdays.

Fueled by this wonderful news, I began to shovel pancakes with fresh sweet berries into my mouth.  Ryan calmly ate his breakfast sandwich and considered my mood.  Had it in fact improved?  Was I no longer a Rage Monster or did I still need to be approached with caution?  I had been fed, yes.  I was much more conversable, true, but I still had to subtly blow my nose into my napkin and excuse myself to visit the restroom more than once.  Yet sitting by that lush garden with a warm cup of mint tea, I decided and vocalized that I was ready to explore this new country, learn a new language, and would be ok with not throwing my toilet tissue into the toilette as I was used to doing.  I now accepted that toilet tissue went into the provided trash can and it was no big deal.  Though relieved, I don’t believe Ryan was entirely convinced of my declaration when we paid our nine dollars and rose to leave.

As we skirted our way around the edge of the flowers, Monica gave us her business card and told us to call her if we had ANY questions about anything.  It was icing on the cake.  Thanks to Monica and The Loft Garden Café, my spirits were completely restored.  We still returned to the apartment immediately after that and slept most of the day, but when we woke up, still sick and still jet-lagged, I took a hot/cold shower because yes! I was ready to go out into the world and explore.  My mission—to find another garden café, as it had been another eight hours since I had last eaten.  I was hungry for more.